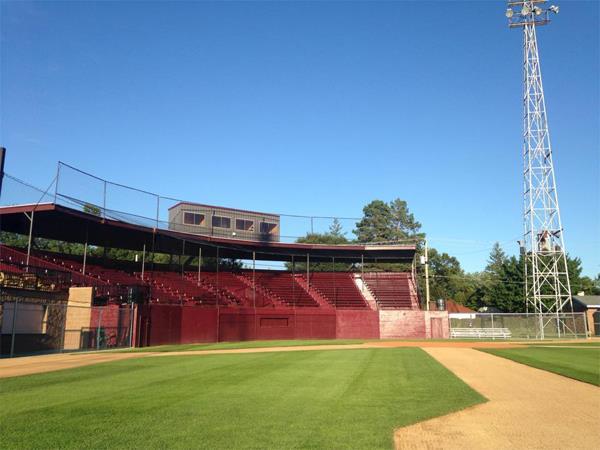 With only a half hour rain delay, we were able to get in the final four games of the night. In the 5 p.m. game in Cold Spring, it was the St. Patrick Irish topping the New Munich Silver Streaks by a final of 6-0.

Seth Ambroz pitched a four hit shutout to pick up the win for the Irish. Matthew Pexa went 1-4 with two RBI to pace an offense that totaled 12 hits on the evening compared to the Silver Streaks four hits.

In the night cap at Cold Spring, Chokio used its speed on the base paths to gain an early lead and never look back as they defeated Hamburg 8-2. Colten Vien, a draftee for Chokio, pitched a complete game.

Vien allowed just four hits and two earned runs, four hits, three walks and struck out eight batters. Alex Erickson and Chandler Erickson each went 3-5 in the game and combined for three runs and three RBI. Scot Arganbright picked up a pair of hits for Hamburg.

In Watkins, the Kimball Express used a pair of long balls to take down the Nimrod Gnats 3-2. The Gnats actually outhit the Express 7-5 in the game.

The Gnats jumped out to a two-run lead in the third inning, but Kimball scored one run in the fourth, seventh and ninth inning to take the game. Ben Johnson came up with the go-ahead home run in the top of the ninth while Adam Beyer also hit a four-bagger as well.

Dylan Glass picked up the win after getting five outs of the ballgame. Ben Johnson started the game pitching seven and a third innings allowing two runs on six hits and striking out nine runners.

In the final game of the night at Watkins, Cannon Falls dropped Roseau by a final of 6-2. The Bears trailed the Royals 2-0 after five but a six run seventh inning was the difference.

Keith Meyers pitched a complete game and allowed just six hit and two earned runs while striking out 11 batters. Tanner Jackson went 2-3 at the dish with one run scored while Brock Peterson was 2-4 with one run and one RBI.

There is one thing we know for sure after today. There will be a new champion in Class C.

Well I think the biggest story of the day so far was the game that just finished up between the Sobieski Skis and the Spring Hill Chargers. The Chargers were able to knock of the defending state champs by a score of 1-0.

The Skis had the tying run on third in the bottom of the ninth with two outs, but a grounder to the shortstop ended the game. Austin Schoenberg had a no hitter through the first five inning and surrendered his first hit in the top of the sixth. From there, Ben Schroeder pitched 3 1/3 innings giving up just four hits. JaColby Anderson closed out the game getting the last two outs.

Christ Spanier had the lone RBI in the game driving in Eric Schoenberg in the top of the fourth.

In the early game of the day at Cold Spring, the Fort Ripley Rebels defeated the Mora Blue Devils 5-1. Ethan Branum got the win for the Rebels pitching a complete game allowing eight hits and one earned run while striking out eight batters.

The Rebels jumped out to a 1-0 lead in the second and tacked on four more runs in the fifth to push the lead to 5-0. The Blue Devils did push one run across in the sixth, but that would be it. Bill Sather led the Rebels offense going 2-3 with a run and an RBI while Rhett Williamson went 2-4 with an RBI and a run scored.

In the early game at Watkins today, the Lamberton Long Sox edged out the Shakopee Coyotes 2-1 despite being outhit 6-5. Lamberton’s starting pitcher Johnny Pistulka all nine innings allowing six hits and one earned run.

In the 1:30 game at Watkins, it was the Delano Athletics topping the Sleepy Eye Indians by a score of 2-1. There was only 11 combined hits between the two teams in the game.

Toby Hanson hit a home run joining Adam Gregg of Maple Plain as the only two hitters to hit a home run to push the lead to 2-0. In the top of the ninth, the Indians tried to mount a rally but it came up just short.

Jake Gleason picked up the win pitching six innings and giving up just two hits. Trevor Jaunich picked up the save pitching the final three innings of the game.

So far today, it seems like the pitchers have the upper hand. It doesn’t surprise me with how the wind has been blowing for most of the day. I am sitting in the press box right now in Cold Spring and it was raining a bit. Some of the players are now coming back onto the field and stretching and tossing. My guess is the 5 p.m. scheduled start time for the next games will be pushed back a bit.

What a great crowd that showed up to the opening round game in Cold Spring between Blue Earth and Lake Henry. Blue Earth took control of the game taking a 10-0 lead and needing just three outs to send everyone home early.

With the Lakers down to their last out, they were able to rally for a pair of runs to extend the game. The Pirates would prove too much though as they won by a final of 10-3.

Starting pitcher for Blue Earth, Aaron Wendt, went eight strong innings striking out 11 and allowed three earned runs to pick up the win. Brandyn Olsen went 3-4 at the dish with three singles while knocking in three runs and scoring one of his own.

Blue Earth outhit the Lakers 9-6 but took advantage of a couple of errors and were able to pick up some walks to get the offense in motion. The Pirates move on to battle Owatonna next Saturday in Watkins at 1:30 p.m.

In other action tonight, Maple Plain defeated Raymond by a score of 10-3. The Diamond Devils took an early lead and never looked back. They advance and will play Morris Sunday, August 30th at 5 p.m. in Watkins.

Here’s a look at tomorrow’s lineup:

Well it’s that time of year again. It doesn’t get better than playoff baseball! This will be my first year covering the state tournament and I am very excited to get things underway tonight.

I will be in Cold Spring tonight covering the opening game featuring the Blue Earth Pirates and the Lake Henry Lakers which starts at 7:30 p.m. I will be tweeting coverage of the game so be sure to follow us on twitter @MinnBaseball.

The other game, which takes place down the road in Watkins, will be between the Raymond Rockets and the Maple Plain Diamond Devils. I will keep updates on this game as well.

Tomorrow I plan on being in Cold Spring for the first two rounds of games than heading to Watkins for the final games of the day. Be sure to check back here for updates and recaps of games throughout the tournament. Let’s keep our fingers crossed for good weather and good luck to all participating teams.