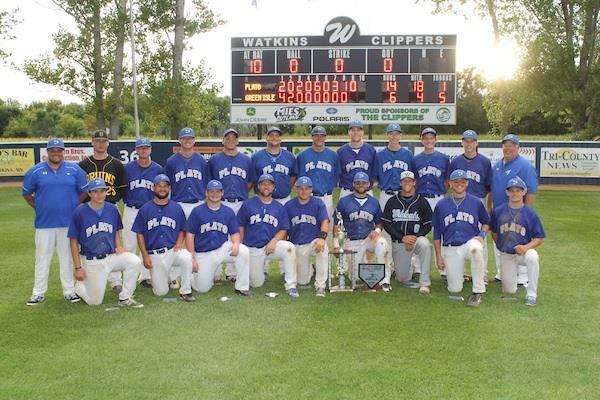 Alex Twenge started on the mound for Green Isle, and his second pitch of the game left the field, as Chris Odegaard put Plato on the board early with a solo homerun to left field. Nolan Lepel and Ben Slater both followed with singles. Joe Nix then reached on an error by the Green Isle shortstop, scoring Lepel to give the Bluejays a 2-0 lead.

Green Isle responded right away in the bottom half of the first, scoring four runs off three hits. Zach and Lucas Herd led off the inning with a base on balls. Plato starting pitcher Chris Odegaard continued to struggle, as Mac Zachow hit a long single to right field, scoring Zach Herd. Tony Kley then entered the game to relieve C. Odegaard. Alex Twenge then doubled to center to score Lucas Herd, tieing the game at 2-2. Axel Twenge added another single, scoring Zachow and his brother Alex to push the lead to 4-2.

The Irish would add another two runs in the second when Mac Zachow hit a two-run homer to right, similar to his bomb in the semifinal game against Howard Lake, increasing the lead to 6-2.

After the second inning, Kley and Plato didn’t look back. Tony Kley went on to pitch seven shutout, hitless innings. Great pitching and defense brought momentum to the plate for the Bluejays. Plato went on to score two runs in the third inning, sixth in the fifth, three in the seventh, and one in the eighth for a 14-6 final score.

Kley completed the tournament with impressive statistics. The Winsted draftee finished with a record of 4-0 with a 0.90 ERA and 36 strikeouts. He also only allowed three runs in 30 innings pitched.