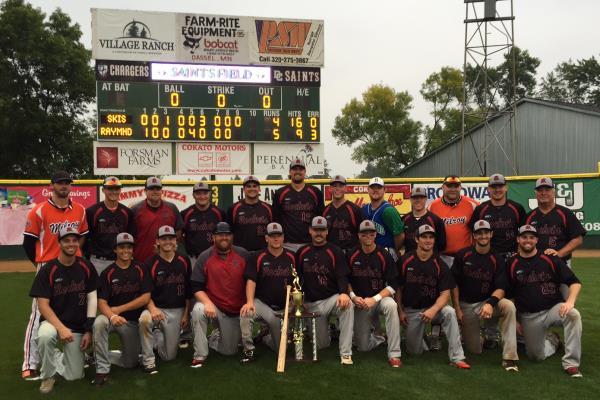 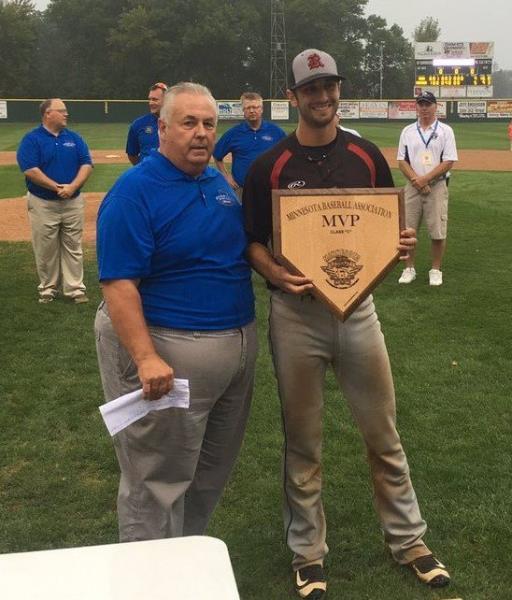 Steen, who was named the Class ‘C’ Most Valuable Player after the game, strode to the plate in the bottom of the fifth with the bases loaded and one out with the score tied at one against Sobieski ace Tyler Jendro, the 2014 tournament MVP. The Rockets’ catcher wasted no time making his mark, clubbing Jendro’s first pitch deep over the fence in left-center and off the light tower at Saints Field to give Raymond a 5-1 lead.

The Rockets opened the scoring in the bottom of the first with a well-struck single from Raymond left fielder Mike Jeseritz, who attacked Jendro’s first pitch of the game to reach first base. After a bunt from right fielder Justin Koenen and a Jendro wild pitch moved Jeseritz to third, Steen drove a fly ball to center to score Jeseritz and give Raymond an early 1-0 lead.

Raymond starter Alex Lothammer kept Sobieski at bay until the top of the third, when the Skis took advantage of a costly Rockets’ error. After Sobieski left fielder Josh Wenzel doubled, Skis third baseman Joey Hanowski bounced a groundball to Raymond second baseman Austin Smith with two outs. Smith fielded the ball cleanly but sailed his throw over the head of Rockets first baseman Kyle Knott to score Wenzel and tie the game at one.

The score remained 1-1 until Steen’s massive shot in the bottom of the fifth. Raymond got the rally started when shortstop Eric Hulterstrum pushed a seeing-eye single through the middle with one out. Jendro spun a curveball to Jeseritz, who turned the deuce into a line-drive single through the left side. Koenen found the same hole with a single of his own to load the bases for Steen, who crushed the first pitch he saw to give the Rockets a four-run advantage.

Skis designated hitter Jon Czech singled sharply on the first pitch he saw from Alex Lothammer, and Werner couldn’t handle Skis right fielder Thomas Miller’s bouncing grounder to put runners on first and third with nobody out. Jendro aided his own cause with an RBI base hit between third and short to make it 5-2 in Raymond’s favor and put runners on first and second.

Sobieski catcher Riley Hirsch popped out on Lothammer’s first pitch after a Raymond mound visit, bringing up Sobieski’s Beau Hanowski. The leadoff hitter laced an RBI single to center to score Miller and bring the Skis within two runs. Wenzel bounced an infield hit to the right of Hulterstrum, who bobbled the ball and attempted a fadeaway throw to force the runner at third — only to sail the throw into the third-base dugout and score Skis pinch-runner Zach Opatz, who had entered for Jendro.

With the Rockets narrowly hanging on to a 5-4 lead, Raymond manager Butch Steen called on righty Austin Deutz, a draftee from Milroy. Deutz quickly steadied the ship, retiring Skis first baseman Scott Litchy on a flyout and third baseman Joey Hanowski on a groundout to escape the inning with the one-run lead.

Jendro settled in after Steen’s slam, holding the Rockets scoreless in the sixth, seventh and eighth innings while allowing only one hit, a double to Cal Kosminskas in the eighth inning.

Deutz allowed two baserunners in both the seventh and eighth innings, but the Milroy right-hander escaped any trouble and kept Raymond up 5-4 entering the ninth inning.

The Milroy draftee quickly retired Czech and Miller in the top of the ninth to put the Rockets one out away from the first state title in the team’s history. As the rain fell and the Rockets’ fans rose to their feet, Tyler Jendro delayed the celebration by slapping a single up the middle to bring Hirsch to the plate.

Hirsch, representing the go-ahead run at the plate, fouled off a couple of Deutz’s pitches to work a 3-2 count. Deutz delivered a knee-high fastball that nicked the outside corner to catch Hirsch looking and send the Rockets and their fans into hysterics.

The Skis out-hit the Rockets 16-9 but Sobieski stranded 15 baserunners, as Lothammer and Deutz shut the door on the opposition when it mattered most. Jeseritz — who, at 37, has been on the Rockets since he was 16 years old — stroked three singles and scored two runs in four at-bats to key the Raymond offense from the top of the lineup.

Steen drove in all five of the Rockets’ runs with his grand slam and sacrifice fly, ending his terrific state tournament run with a 1-for-3 day. Raymond right fielder Justin Koenen and third baseman Cal Kosminskas each tallied two hits in the state championship victory.

Six Skis notched multi-hit games: Beau Hanowski, Wenzel, Joey Hanowski, Collin Eckman, Czech and Jendro each had at least two hits and combined to go 13-for-28 with two RBI and a run scored. Jendro went the distance on the bump, allowing nine hits and five earned runs, walking one and striking out five, to take the loss.

Lothammer gave up 12 hits in 5 1/3 innings but managed to claim the win, and Deutz picked up the long-distance save, retiring 11 Skis on three strikeouts while allowing four singles.