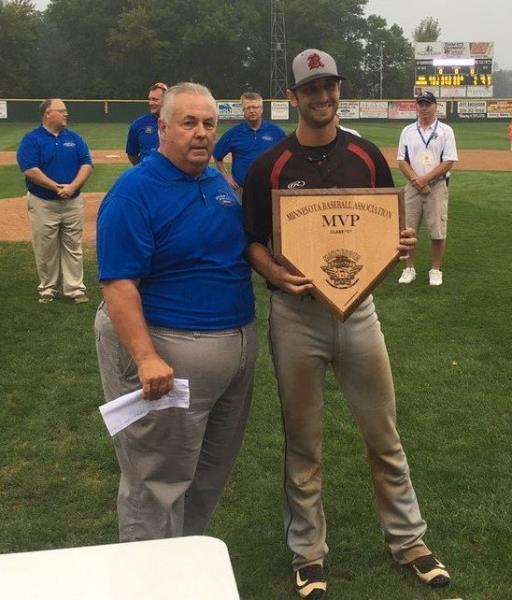 Our experts have weighed in on their favorites, upsets, underdogs and dark horses for the Class C state tournament that begins Friday at the Hamburg and Norwood sites. Some of them have delved deeper in their analysis by breaking down multiple portions of the bracket. We'll give them extra credit for their picks. But the fun will be seeing how their predications stack up. Without further ado, here are the picks.

The Favorite: Sartell Muskies, they are 27-4, winners of 16 in a row.  They’ve been one of the best teams all summer.

The Dark Horse: Fairmont Martins, they drafted Brandon Alfson from Pipestone, Collin Lovell from Windom and Joey Fitzgerald from Truman, to go along with their own ace Spencer Chirpich. They are loaded.

The Upset: Hadley over Cannon Falls. The Buttermakers have a strong hitting lineup, experience and Worthington ace Lucas Henning.

The Underdog: Blue Earth Pirates. It’s hard calling them an underdog, but they scrambled to get into the state tournament, but now that they are there, they have experience and pitching to make a run in a tough bracket.

The Dark Horse: Buckman, haven’t heard much about them all year but are the No. 1 seed out of Region 8

The Upset: Buckman over Raymond

The Underdog: Rochester Roadrunners, advance out of Region 5 where they were the No. 8 seed.

The Favorite: Plato, playing very well at the right time. Shown the Blue Jays now have pitching to go with their hitting. Besides all the games are in their backyard.

The Dark Horse: Hampton, I know they are a No. 1 seed and their record isn’t overwhelming, but this is a good team.

The Upset: Maple Lake over Jordan

The Underdog: Springfield, tough draw with Sobieski and then Plato if it advances.

The Favorite: Hutchinson, looking to capitalize on missed opportunities from last year.

The Dark Horse: Hadley, coming in as a No. 3 seed from Region 13, but still a very good club.

The Upset: Avon over Hutchinson second round

The Underdog: St. Peter, first round versus Avon and then Hutchinson in the second round, if they can get by those two, who knows what they can do?

The Favorite: Sartell, such a strong team all around.

The Dark Horse: Carver, with all the quality lefties they can throw at you anything can happen.

The Underdog: Henderson, their first appearance in 80-plus years, how far can their luck hold out?

With this being my first year of being part of “the rankings”, I tried all season, to keep my homer nature hidden, and studied records, and leagues on a weekly basis. With it being state tournament time, I can’t hold it back, and I apologize for jinxing any teams, which I have been known to do from to time to time. So here we go:

The Favorite: With the defending champions Raymond, and the state runner-up from last year and state champs from 2016, Sobieski, plus the 2015 champions Plato, this half is stacked with teams with tournament experience. With that being said, based on matchups, I am going to go with Hampton. They have been in my top 10 most of the season, and the earliest they would see one of those teams would be the round of 8.

The Dark Horse: Here comes the homer in me. You win your league in the regular season, you reach the Final Four of the state tournament three years ago, I don’t think they are going to sneak up on anyone, but let’s go with Faribault. They areled by a 1-2 punch on the mound of Matt Lane, and Jack Helgeson, plus Egan Bonde has been impressive as well. To win a state title you need to be deep in pitching. The Lakers have that covered.

The Upset: I don’t know if New Prague goes with Nathan Sprouls or draftee Trevor Smisek in game one, but both pitchers throw hard, and could keep the Watkins bats quiet in round one. Very good defensive squad, with Austin Bachmann covering center field and more, plus veteran Dan Novak behind the plate, if the Orioles can clip the Clippers, don’t be surprised to see them Labor Day weekend.

The Underdog: In the early to mid-80s I spent a lot time at Willkommen Memorial Park in Young America. I sat in the left field corner, putting up the wooden numbers on the scoreboard, watching Mark Worm, aka my Dad, playing for the Cardinals. In 2017, Doug Stender, who played with my Dad, is a coach; Brandon Stender, who was a bat boy back then, plays for the Cards. It’s a nostalgic pick, but I still remember the Young America fight song, that was sang at what use to be Mueller’s after each YA victory.

The Favorite: I’ve talked about state champions in recent history earlier, let’s go back to 2013. That’s the year Sartell won the whole thing. Great competition all year long, 25 wins going into the tourney, and winners of 14 straight. These fish are hot, and there is a reason they were ranked No. 1 overall in one of our previous rankings.

The Dark Horse: (See Dark Horse from above) Same reasons for this pick, Union Hill, led by a strong 1-2 punch on the mound, with Lefty Daniel Feneis, and righty Derek Masberg. Drafting Montgomery’s John Krocak adds more depth to a good bullpen. I enjoy watching guys take away potential doubles in the outfield, and the Bulldogs have a couple of guys in Jesse Bastyr and Bryan Linder that do just that. I see the Bulldogs and the Muskies in an Elite 8 matchup, with the winner my favorite to win the title.

The Upset: We call them the Angry Fish, after failing to qualify for the state tournament last year. New Market has been up and down this season, but the Muskies have plenty of state experience. Nate Rost will probably start Game 1 and if there is a Game 2, has a 1.41 ERA with 71 strikeouts in 83 innings pitched. The Fish can change a game with one swing of a bat, along with Rost; Kyle Bergstrom, and Andy Henkemeyer can deposit one over the fence at any time. If they win their first two, I can see them “Elevating and Celebrating” into the Elite 8

The Underdog: Maybe the easiest choice of all. Last time this team was at state, gas was 10 cents a gallon, a loaf of bread was 7 cents. It’s been since 1932, or 85 years if you do the math, since Henderson has been to the state tournament. Nicknamed the “Comeback Cats” the Tigers won their last three games in extra innings to get to state, including erasing a 8-0 deficit in one of those wins. I know they are the talk of the community and the area, and I expect to see plenty of black and orange shirts in Hamburg on Saturday. They have a tough draw with Milroy, and the winner getting Union Hill. But it’s one of the best stories of the tourney. I just say, “Why not the Tigers?”

The Favorite: I'm going with Raymond. I think a Region 8C team will make it into the final four, though I'm not sure who that will be. The Sartell Muskies are another team I like to be there on the final weekend. I think Plato has a good shot, too.

The Darkhorse: My long-shot is Fergus Falls. Northern teams don't get a lot of respect. The Hurricanes are one of the teams north of Brainerd with a chance to make some noise.

The Upset: How about Mora beating Raymond in the first round. Asa Patterson is the Blue Devils' ace and one of the top pitchers in the Eastern Minny League.

The Underdog: Lake Henry fits the mold. The Lakers aren't on anyone's radar screen, but have a power-laden lineup. They're the best-hitting team in the Stearns County League. Let's see how that plays out at state.