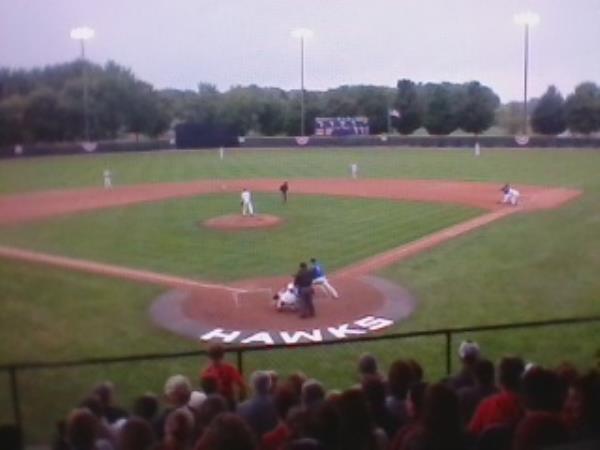 Weston Brinkman of Lake Henry jumped at the first miscue as the Lakers beat the Cardinals 7-1. The Cardinals missed a pop up to left field in the third inning as Brinkman darted home to break a 0-0 tie.

“I wasn’t really sure what was going on,” Brinkman said about the error. “After that, it took off.”

“It was a little bit of motivation,” Cardinals manager Adam Kostecka said.

Young America bounced back in the third after the Lakers run to leave another base runner stranded. The Cardinals also fielded a double play to end the fourth inning and keep the game 1-0.

Jason Kampsen provided a lift for the Lakers with 2 RBI and a run on 2-5 hitting as his team scored six runs in the sixth and eighth innings. Josh Kampsen, Matt Quade, Grant Ludwig and Ryan Wuertz all drove in runs. Brinkman finished 2-3 hitting with two runs scored.

Brad Mergan, Lake Henry’s draft pick from Farming, threw 4.2innings and allowed one run. Lakers pitchers Patrick Courtney, a draft pick from New London-Spicer, and Jason Kampsen limited the Cardinals to a hit the rest of the way.

In what began as a pitching duel ended as a slug fest for St. Peter.

Tied 1-1 in the seventh inning, the Saints scored five runs over the final three innings to beat Hutchinson 6-1. That included a couple runs in the ninth with bases loaded.

“Our team’s been rolling this last few games, and it’s great for us [pitchers],” said Saints pitcher Andy Regner, who entered the game in the seventh with a 1-1 tie.

Before the late swing, Huskies starting pitcher Jayden Juergensen kept the Saints in check with two strikeouts and four hits allowed in four innings. His Saints counterpart, Jesse Anderson, went six innings and fanned four batters while allowing three hits and no earned runs. He had confidence in Regner, a St. Peter High School junior, filling after that point.

“When you know you’ve got a youngster coming in who throws a little harder than me, that’s what you’ve got 15 guys in the dugout for,” Anderson said.

Regner shut down the Huskies with three hits allowed and one strike out one in the final three innings.

“It’s another game just a like a high school game – go in and throw strikes,” Regner said.

St. Peter scored first in the opening inning with a deep line drive by Shea Roehrkasse to send home Ty Kaus. Hutchinson threatened to score several times with a runner at third base in the third and fourth innings, but it took precise base running by Adam Katzenmeyer to tie the game in the sixth. He scored on a sac fly by Juergensen.

Jordan Wilmes scored on an error for St. Peter to gain the lead for good in the seventh. Jeff Menk then drove a shot to deep left field in the eight to score Billy Hanson for a 3-1 lead. Kaus added to the momentum with a RBI to center field as Menk hurried home and avoided a potential tag.

St. Peter piled on the momentum in the ninth by loading bases with no outs. Jovan Rodriguez and scored on a Hanson single, and CJ Siewert came home on an error.

“It’s not the way we want to go out,” Juergensen said.

Alex Lothammer threw a four-hit shutout as Raymond ended Buckman’s first trip to the state tournament in 12 years in Hamburg.

Lothammer went seven innings and struck out 10, and he walked two batters. He mixed sliders, fastballs and changeups to keep the Billygoats’ bats off balance. He said his fastball clicked in particular.

“Buckman was a really good hitting team,” Lothammer said. “They stayed back on balls.”

Buckman drew some of its players from Pierz’s Legion team, which won Division II state and regional titles. Raymond’s bats put the Billygoats in a hole quickly to support Lothammer’s efforts.

Brett Swanson and Calvin Kosminskas got the scoring going for Raymond in the second inning with sacrifice flies, which scored Jordan Smith and Eric Hulterstrom respectively.

Kyle Knott added to the Rockets lead in the sixth inning with a solo home run. Kosminskas followed that up in the seventh with his second RBI of the day, and Justin Koenen brought him home on a sac fly for a 5-0 lead. Tyler Steen sealed the game in the top of the ninth with a two-run home, which also scored Koenen for a 7-0 cushion.

Buckman threatened in the ninth with Peter Suska, Zach Lannners and Mark Kahl all reaching base. Kosminskas tagging Suska out at third prevented the Billygoats from loading the bases. Rockets closer Cole Christianson fanned the next batter, and the Rockets fielded the following at-bat to end the contest.

“We could never put much together all day consistently,” Billygoats coach Paul Oldakowski said.

Dominic Dolan put Milroy ahead early, but Union Hill took control from there en route to a 6-1 win.

Union Hill loaded bases in second inning scored three runs to grab a 3-1 lead and never look back. The Bulldogs added two more in the fourth and another in the fifth as they out-hit the Irish 10-6.

“It was good after they put one up in the first to come back in the second and get three,” Bulldogs infielder Conrad Masberg said.

Bryan Linder led the Bulldogs lineup with 1-3 hitting, a run and two RBI. Conrad Masberg also scored once and drove in a run on 1-4 hitting.

Bulldogs pitcher Derek Masberg went 7.67 innings and struck out four batters. He gave up one walk, a run and five hits. He had lots of help from a fielding crew that committed no errors and seldom allowed a hit to go extra bases.

Tyler Peterson and Mason Schnaible both had the only multi-hit games for the Irish with two apiece. Schnaible also had the lone RBI.