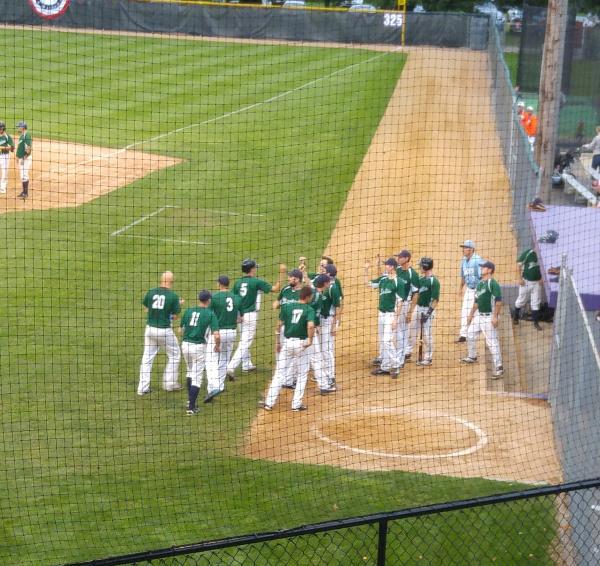 Irish bats come alive late to get past Lamberton

The cow bells could be heard late in the game as the Irish managed to break open a 1-1 tie in the top of the seventh. After hitting a solo shot in the third, Tyler Fietek drove in his second run of the game with an RBI single to give the Irish a 2-1 lead. The Irish never looked back.

The bats woke up in the ninth inning as the Irish managed to put together a huge two out rally. The first two batters got on base and the next two popped out and struck out. Zach Herd then delivered a huge hit in the left field corner that scored two runners. Lucas Herd then proceeded with a single to score Zach. That was it for the Lamberton starter Johnny Pistulka who was one out short of a complete game.

Josh Anthony and Mac Zachow hit back-to-back singles right away off of New Ulm draftee Wade French which led to another run. Anthony would score another run on a wild pitch. French only lasted four batters after he hit Alex Twenge. Shane Schoborg entered the game and got his first batter to fly out on the second pitch.

Johnny Pistulka had kept the Irish bats in control for most of the game as he finished with 8 ⅔ innings pitched. He managed to strike out eight batters as he hit 138 on his pitch count before being pulled. He also had the only RBI for Lamberton as he hit an RBI double in first inning to initially give the Long sox a 1-0 lead.

Green Isle will St. Peter next Saturday in Norwood.

Bemidji’s bats woke up early and they did not stop throughout the game. The Blue ox touched up the Pirate starter Lee Hodges right away with two runs in the first from a deep two out two RBI single from Bazil Zuehlke.

The blue ox then added two more runs in the third inning. Cody Benson led off with a single followed by a walk to Cody Rutledge. Collin Rutledge then delivered with a two RBI single to make it 4-0.

Blue Earth managed to get on the board in the fifth inning with a sacrifice fly from John Franta. Bemidji responded right away in the bottom frame with a solo blast from Cody Rutledge that everyone knew was gone the second it left the bat.

The pirates managed to tack on another run in the sixth with a groundout from Aaron Wendt with the bases loaded. Bemidji was not done as they added two more insurance runs in the seventh inning with a RBI double from Zuehlke, his third RBI of the game, and was followed up by an RBI single from Matt Baier.

After a wonderful performance last week, Lee Hodges got the call again for the Pirates but this time the Blue Ox managed to get to him as he went seven innings and was responsible for all seven runs (five earned). Aaron Wendt pitched the eighth inning walking one and striking out two.

“As soon as I hit it I knew it was gone. This is a close knit group we have here, we grew up playing with each other and that’s what makes playing in this type of situation even more fun.”- Cody Rutledge on his home run and playing with the Blue Ox. Rutledge went two for three with a single, home run and scored three times.

Bemidji will play Sartell next Saturday.

Muskies score eight straight runs to rally past the Orphans

This last game of the day in Hamburg was certainly the most entertaining one of the day. Neither team was willing to give in as they were fighting to stay alive. Sartell scored in six of the eight innings they batted in.

It started in the first inning for the Muskies when Adam Schellinger led off with a single and was driven in two batters later when Tim Burns blasted a ball over the left field fence for a two run homer.

In the second inning Steve Boger got hit in the arm to start out for the Orphans. He would be advanced over to third by a single from Ben Borrell. When Borrell got caught in a run down on a pickoff and Boger took off for home and scored thanks to a bad throw by the second baseman. The Muskies responded with a run in the bottom frame by an RBI single from John Schumer to make it 3-1.

The Orphans started their comeback in the fourth inning when the first batters got on base via walk and a hit by pitch (Boger again). Zach Kuefler hit a fly ball just short of going over the wall as that would drive in a run to make it a one run game. Steve Bobrowske entered the game as a pinch hitter with two outs and the runners on third and second base and delivered a two run single to score Boger and Kuefler to go ahead 4-3.

Brett Ahsenmacher led off the fifth inning for the Orphans with a single and made an interesting trip around the bags as he stole second base, advanced to third on a wild pitch, and then scored on a passed ball to extend the lead to two runs. John Schumer got his second single of the night in the bottom frame and advanced to second on a passed ball. Tim Burns followed up driving him home on a single to make it 5-4 after five innings of play.

In the bottom of the sixth Brian Schellinger started by reaching on base on an error by the third baseman. He then stole second base and tied the game on Cody Partch’s single. With two outs Adam Schellinger hit a ground ball to the shortstop who overthrew the ball to first base which led to Partch scoring and giving Sartell the lead. Howard Lake starter Mike Dockendorf was pulled after that play.

Sartell added three more runs in the seventh inning as Jace Otto drove in the first one on an RBI double. He was driven home on a botched fielder’s choice attempt as the shortstop made a bad throw home resulted in Otto and Partch scoring.

Two more Muskie runs happened in the eighth inning as they managed to get the bases loaded with two walks and a single. With two outs Cody Partch hit a line drive base hit to center to score both runs.

The Orphans gather two more runs in the ninth inning as the first two batters got on by a single and a hit by pitch. They would be scored on a groundout and a throwing error by the third baseman.

David Deminsky started for the Muskies as he went five innings allowing five runs (three earned) allowing only four hits and two walks, but striking out ten (nine swinging). Adam Wenker came in at the start of the sixth inning and went the rest of the way as he kept the orphan bats in check allowing only three hits, no walks, two runs (one earned), and striking out four.

John Schumer and Cody Partch combined went six for eight (3 for 4 each) with five runs scored and four RBIs.

Sartell will go on to play Bemidji next Saturday.