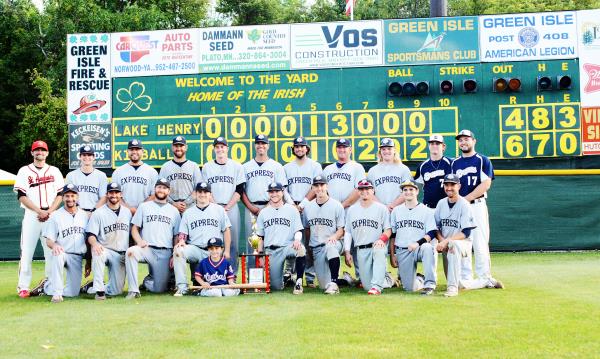 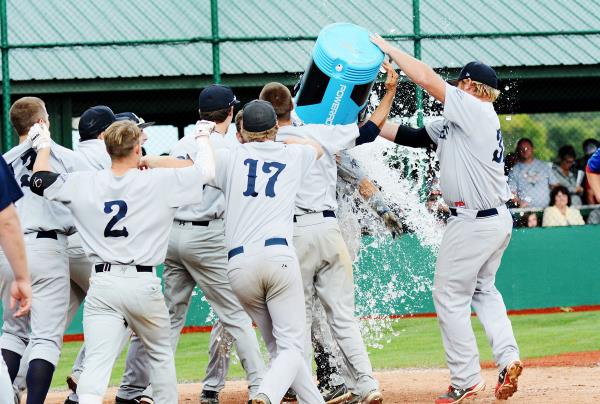 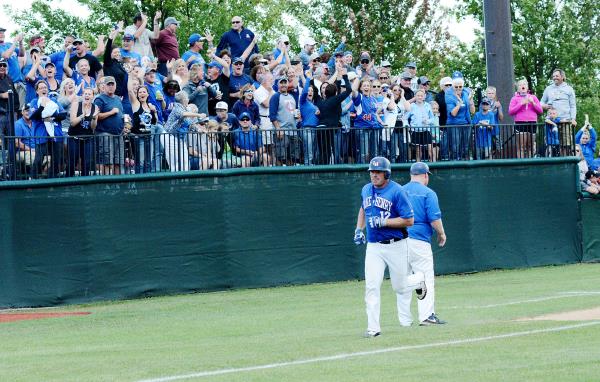 GREEN ISLE — Scott Marquardt put his arms in the air as soon as he finished his swing. At the time, he didn’t know the ball would land over the left-field fence; all he knew is he hit it hard enough to score his brother, Brooks, from second base.

That swing gave the Kimball Express a championship.

Scott Marquardt’s two-run homer in the bottom of the ninth made Kimball a 6-4 walk-off winner over the Lake Henry Lakers in the Class C championship game Monday at The Yard. It was the first state title for Kimball, in a matchup of teams both looking for their first championship.

Marquardt turned on an inside fastball to end an entertaining back-and-forth game that featured four home runs. The final one, like the others, cleared the left field wall, and Marquardt leapt in celebration down the first-base line as he saw his brother score.

The fact it was a home run was just a little extra bonus — driving in Brooks was the important thing.

“I just knew my brother was going to score from second, that’s all I knew, one way or another,” Scott Marquardt said.

After controlling the beginning of the game, Kimball saw Lake Henry take a 4-2 lead in the sixth. A rain delay following the sixth lasted about half an hour, and once play resumed, the Express bats woke up.

Jordan Joseph hit a two-out single in the bottom of the seventh and Adam Beyer followed up with a two-run homer to left to tie the game 4-4.

Kimball worked around a leadoff walk in the ninth, as Ben Johnson — who pitched a one-hitter the day before — came in to finish out the top of the frame. In the bottom, Brooks Marquardt led off with a hit and was bunted to second by Austin Ruehle to bring up Scott Marquardt.

Kimball and Lake Henry scrimmaged in their week off — the two teams earned byes to the second weekend of state — and Marquardt actually faced draftee Brad Mergan of Farming, who entered for the Lakers after the leadoff single. In the scrimmage, Marquardt struck out; this time, he managed to get the barrel onto the ball.

“I wasn’t thinking about it,” he said. “I was just trying to do whatever I could to put the bat on the ball. I knew I couldn’t strike out, I just had to do something to try to move my brother around second base to score. I guess I did.”

Lake Henry took the lead in the sixth on back-to-back home runs. Grant Ludwig hit a two-out single and came home on Ryan Wuertz’s two-run shot to left. Adam Miller followed that with a solo shot and the Lakers led 4-2 heading to the middle of the sixth.

“It’s truly unbelievable,” said manager Tom Marquardt, who’s the father of Scott, Brooks and Brian, who all play on the team. “Not much else to say. Played a great team, Lake Henry’s a great team. It was fun to play. Cherish the moment.”

Scott Marquardt drove his brother in with a hit for the first run of the game, as Kimball went up 1-0 in the third. Shane Kampsen tied the game for Lake Henry in the top of the fifth with a two-out double, but Kimball responded in the bottom with a walk and error to start the inning. Marquardt drove in Matt Dingmann with a sacrifice fly for a 2-1 Express lead.

Marquardt, who was the tournament MVP, went 2 for 4 with a run and four RBI in the game. Brooks Marquardt was 1 for 2 with a walk and two runs scored.

Johnson got the win for his perfect inning, backing up Dingmann, who went 5 2/3 innings in starting, allowing four runs on eight hits and two walks with two strikeouts. Joey Von Wahlde pitched 2 1/3 innings of middle relief, allowing just one walk.

Tom Marquardt first started playing for the Express decades ago. Now, the 2009 Minnesota Amateur Baseball Hall of Fame inductee can add managing a state championship team featuring his three sons to the list of accomplishments with Kimball baseball.

“It’ll be big,” Tom Marquardt said. “I think something like this is a long time coming. Had some of the guys here, some guys that I played with when I first started playing. Had them come back here and see us get it done, it’s pretty special.”

Kimball’s run saw the Express start the tournament with a 5-3 win over New Market in the second round. Kimball then beat Fergus Falls 7-3 before a 7-0 shutout of Green Isle in the quarterfinals and a 3-0 win over Bemidji in the semis.

“We’ve got just an awesome group of guys, and they’ve been together for a long time,” Scott Marquardt said. “We’ve come close so many times, and we’ve probably gotten beat in situations where we probably shouldn’t have. This year, it was magical. All of a sudden, you win the first game, then all of a sudden it’s the second game, then your’e down to eight teams. Now it’s starting to sink in that you’re one of the teams left to be able to win this thing.

Scott Marquardt was mobbed at the plate after his game-winner and got the water cooler emptied on him soon after arriving home. It was the kind of moment kids dream of having, and it’s at the top of his list of baseball memories.

“There. Yes. That’s the top,” Marquardt said. “There’s nothing that compares to that. Nothing.”