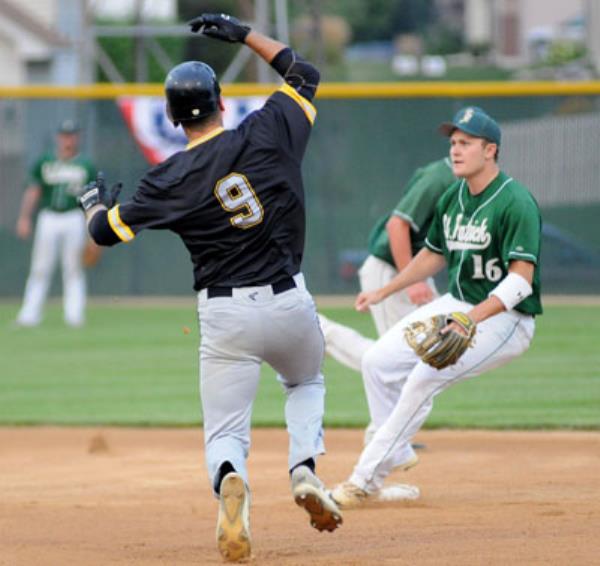 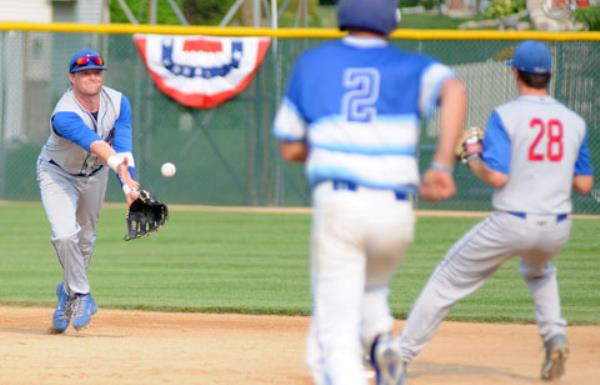 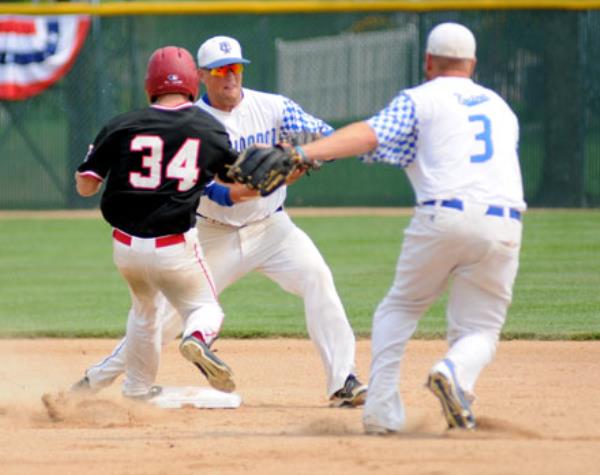 The ebbs and flows of finale Saturday at New Prague might have left some feeling nauseous in the final two innings, but for fans, the St. Patrick Irish and Lamberton Long Sox put together a gem of a game to watch.

The Irish rallied back twice to overtake the Long Sox 4-3 in wild finish. St. Patrick trailed 3-2 heading into the top of the ninth inning on the heels of having given up a 2-1 lead in the bottom half of the eighth inning.

Matt Ambroz got things started for the Irish in the ninth with a lead-off single. Jack Friedges walked and both advanced on a wild pitch to set the stage for Derrick Isaacson, who came to the plate with two outs. Isaacson delivered a single to score both run and eventually win the game for St. Patrick.

The eruption from the dugout and fans released the tension from earlier in the game.

Lamberton lead 1-0 after the bottom of the fourth inning when Colby Pack scored on a double from Christopher Eichten. It stayed that way until the top of the eighth, though the Irish thought they had tied the game in the fifth when Will Walsh drove a ball down the right field line and over the fence. The shot, however, was ruled foul and left St. Patrick crying foul for the moment.

But the Irish got a chance at redemption in the eighth and it came from the bottom of the order. Dom DeLuca hit in Isaacson’s No. 7 spot in the lineup and led off with a single. Isaacson re-entered and moved to second on a sacrifice bunt before coming in to score on Nick Spitt’s RBI base hit. Spitt stole second and later scored on Kyle Rhodus’ base hit. Rhodus later got wiped out on the base path.

The Long Sox had a rebuttal in the bottom half of the inning and it all started with two outs. Johnny Pistulka reached on an error in right field and the Irish intentionally walked Pack, who went 2-for-2, scored twice and reached all four times. Tyler Reiner came through with a two-run double to put Lamberton back in front 3-2.

The Long Sox had one last chance in the bottom of the ninth when Isaac Jenniges doubled with two outs but a ground out to short ended the game.

The late-inning dramatics spoiled what otherwise turned into a terrific duel between St. Patrick starter Josh Simon and Pistulka, the Long Sox’s starter. Simon turned in eight effective innings, allowing three runs, one earned, on five hits. He struck out two and walked two. Pistulka threw all nine, struck out 10, walked one and allowed four runs on eight hits.

Seth Ambroz finished 2-for-4 and Nick Spitt went 2-for-3 with an RBI and a run as the only Irish hitters to have multiple hits.

Christopher Eichten finished with two hits and was the only other Long Sox hitter to have more than one hit.

Buckman scraped together just enough offense to get by Waconia Saturday at Memorial Park Baseball Stadium in New Prague to advance with a 5-1 win.

The Billygoats got early offense from the bat of Matt Kummet, who hit a line drive home run down the right field line in the bottom of the second inning for a 1-0 lead but the bats went silent for a spell.

Buckman (18-5) didn’t get the go-ahead run until the bottom of the sixth after Lane Girtz collected just the second hit of the game for the Billygoats. His single to shallow left field got misplayed and he advanced to second on an error. Aaron Weber followed with a base hit to move Girtz to third and Joe Kahl flew out to right field for the sacrifice fly.

Buckman put things away in the eighth with three runs after taking advantage of an error, two hit batsmen, an intentional walk and two-run single from Mark Kahl.

Girtz reached on an error and advance to second on the play. Weber got hit by a pitch and a sacrifice bunt moved both into scoring position. The Lakers opted to intentionally walk Noa Boser to fill the bases but Kummet got plunked to bring in a run to make it a 3-1 game. Kahl, the next batter came through with a single through the right side of the infield to make it 5-1.

The Lakers (18-11) tied things up in the top of the third inning after Derek Martin drew a one-out walk. A single from Chris Bullis moved Martin to third and he scored on a sacrifice fly from AJ Friedrich.

It became a bit of a pitcher’s duel between Buckman starter Nate Dechaine, a draftee from Nisswa, and Waconia starter Kodey Simon. Dechaine labored early, giving up five hits and walking four but settled in to retire the final 14 batters in a row. Dechaine finished with 143 pitches and struck out eight.

Simon proved more efficient on the mound and walked just one. Simon went 6 ⅔ innings, gave up two runs, one earned, on three hits. He did hit two batters in the bottom of the seventh before getting lifted.

The Billygoats move on to face Hadley next Saturday at 5 p.m. in Shakopee.

New London-Spicer emerged with a 4-1 victory over Howard Lake Saturday in New Prague in a drama-filled game.

The game hung in the balance until the bottom of the eighth inning when Austen Hadley hit a three-run shot to put the Twins in front for the first time in the game.

Mike Danielson reached on an error and Scott Rambow followed with a single yo set the table. Hadley came to the plate with nobody out and ready to swing. His swing provided a no-doubter over the fence to win the game. It was Hadley’s only hit of the game.

For the Twins, it almost became a what-if game. New London-Spicer rallied from a 1-0 deficit in the sixth inning when Danielson hit a solo home run to left center field but it could have been more. John Perkins led off with a triple but slid off the bag for the first out of the inning. Scott Rambow reached on an error following Danielson’s home run and nearly scored, save for a ground rule double from Wyatt White. A called third strike on Austin Rambow ended the stuccato rally.

White led the offense for the Twins by going 3-for-4. Danielson finished 2-for-4 with an RBI while Perkins went 2-for-4.

Howard Lake took a 1-0 lead in the fourth on a double from Ben Borrell to score Steve Boger, who reached on a fielder’s choice.

Orphans’ starter Mike Dockendorf dueled with New London-Spicer’s Adam Nibaur as both scattered hits. They, however, did not walk many. Each team turned a double play to bail out their pitchers. Nibaur went seven innings, gave up one unearned run, struck out two and walked none.

Dockendorf scattered 10 hits, struck out three and walked none, though he hit one batter.

Howard Lake had its chances to in the game but saw a runner get wiped out on his way to third in the fourth inning and stranded two runners in the sixth.

Austin Versteeg, a draftee from Starbuck, picked up the win in relief for the Twins. He threw the final two innings and did not allow a hit.

New London-Spicer moves on to face Chokio next Saturday at 11 a.m. in New Prague.

The Lakers had a last gasp in the bottom of the 10th when Adam Johnson reached on a single and Jan-Erik Lindberg reached on an error with two outs. A groundout to second ended the game.

Fort Ripley rallied to tie it in the top of the ninth when Logan Kalis singled with one out. Brett Kramer brought him home with a single but got caught in between first and second before getting tagged out but the Rebels got what they needed.

The Lakers scratched across the go-ahead run in the sixth inning when Adam Johnson scored on a single from Al Johnson to give them a 2-1 lead.

Adam Johnson not only scored the go-ahead run, he effectively shut down the Rebels for seven innings. He gave up one run on three hits, walked two and struck out six.

The Rebels tied the game 1-1 in the third inning when Branum hit a leadoff double, moved to third on a balk and scored on a sacrifice fly from Luke Weber.

Brian Buening, a draftee from Sauk Centre, took the loss for Pelican Rapids after three innings of work. He gave up three runs on six hits.

Fort Ripley will face New Market next Sunday in New Prague at 11 a.m.