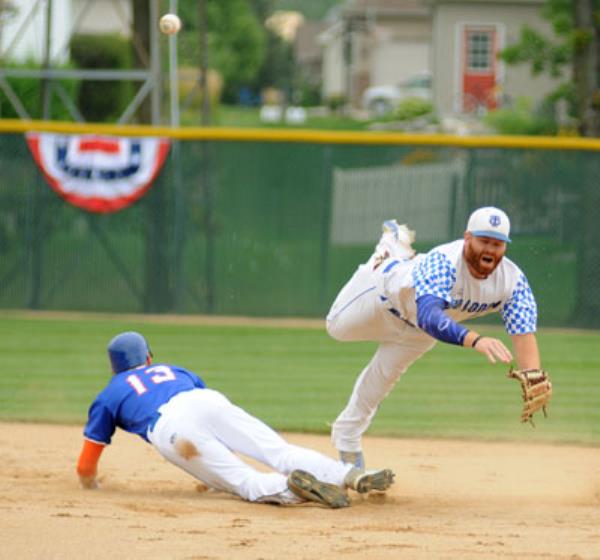 The New London-Spicer bats have been hot this summer and it continued in this contest against Chokio today. The Twins slugged out 18 hits and made nightmares for the Coyotes pitchers in a 12-3 victory.

Chokio opened up the scoring in the third inning with having bases loaded with one out and scoring on a fielder’s choice and a double from pitcher Nick Hervin to jump to a 2-0 lead.

New London-Spicer responded with two runs the next frame as catcher Scott Ranbow singled and advanced to third on a Austen Hadley double. Center fielder Wyatt White drove them both home the next at-bat on a line drive single to tie the ball game.

New London-Spicer followed with another big inning in the fifth highlighted with an RBI single from Ranbow, RBI double from Hadley, and both players scoring on the same play from another single by White to make it a 6-2 lead. The Twins never looked back.

The teams exchanged a run each on a sacrifice fly from Zach Howe for the Coyotes and a RBI single from Wyatt White for the Twins to make it 7-3 after seven.

Heading into the eighth inning the Twins managed to put together a huge two-out rally. With designated hitter Andrew Bangen on second, he was driven home by Jake Rambow. After a walk, left fielder Mike Danielson drove home Ranbow on his second single of the game. Scott Ranbow followed up by driving in two runs on a single. Chokio tried to end the misery by changing pitchers after Ranbow’s single. After another single from Hadley, White delivered his sixth RBI of the game on a single to left to score pinch runner Josh Saine which made it 12-3 which would end up being the final score.

Draftee Austin Versteeg from Starbuck was on the mound for the first seven innings for the Twins as he only allowed five hits, three runs, walking two and striking out five.

Wyatt White was four for five with all singles and a total of six RBIs. Scott Ranbow and second baseman Austen Hadley combined went 6-for-9 (four singles, two doubles) with four RBIs as they were the third and fourth hitters in the lineup.

“We have been hitting the ball well all season. We just had to relax because we know that we are strong up to down and I think that’s what helped us today,” Wyatt White said.

New London-Spicer will play the winner of Jackson v. Sobieski next Saturday

Mathiowetz cruises through the Hurricanes

Class C tradition has it so that all tournament teams can select three players “draftees” to add to their tournament. Sleepy Eye selected Sean Mathiowetz from the Stark Longhorns; and that pick paid off for Sleepy Eye in a 3-0 win.

Mathiowetz stepped on the mound and retired his first 10 batters. He got into a bases-loaded jam in the fourth inning when catcher Dan Revering got a single (the first base hit allowed by Mathiowetz), the next batter got hit by a pitch to put runners on first and second. Opposing pitcher Darin Stanislawski struck out but the next batter walked. Mathiowetz managed to get their third baseman Jake Anderson to ground out to second to escape with no damage.

Fergus Falls managed to strand just one runner every inning for the rest of the game. The Hurricanes had great pitching on their end as Darin Stanislawski went the distance, allowing only eight hits, three runs (two earned) and striking out six. He also had help from his outfield as left fielder Jack Hiedeman made a great catch to end the sixth inning that saved two runs from scoring.

The Indians scored two runs in the third inning on a two RBI single by Joey Walter that scored Alex and Andrew Woitas. Andrew Woitas scored again in the sixth on a RBI single by Alan Woitas. The three runs would be all Sleepy Eye needed to help support their pitcher.

Mathiowetz had a final line of nine innings pitched, two hits allowed, three walks but six strikeouts. He barely touched the triple digit mark in his pitch count and finished with 103 pitches.

“I’ve played with these guys before. This is a fun group and I’m glad they chose me and that I can help them out. I’m very much a pitch to contact pitcher and I had a solid defense to back me up today.” Mathiowetz said on playing for Sleepy Eye.

Sleepy Eye will play the winner of Lastrup v. Hutchinson next Saturday.

Richmond rally falls short; Rockets blast off to the next round

This game had a great crowd supporting each side and Raymond came out with a 6-2 victory. Raymond managed to get an early lead, scoring two runs in the third inning with RBI singles from Tyler Steen and Jordan Smith. The Rockets added another run in the fifth inning with a sacrifice fly from third baseman Cal Kosminskas.

The Royals managed to finally get on the board in the seventh inning. It started with two outs in the inning, Adam Backes was walked by Raymond reliever Cole Christensen. He advanced to third the next at-bat by Trent Gertken’s single. Cole Schmitz hit a chopping ground ball to third and the Raymond third baseman made a poor throw which resulted in Backes scoring and Gertken going to third. Richmond added the second run on a single to right to bring it within one run after seven innings of play.

After a quiet eighth inning for both sides, Raymond managed to finally get to St. Martin’s draftee Ben Schroeder, who was in his third inning of work. Jose Rosario and Mike Jeseritz walked early in the inning and with one out they scored on a Tyler Steen double to right center giving Steen his second and third RBIs of the game. Steen would come around to score on a two out single by John Sawateky.

The royals were not ready to give up though. Facing a 6-2 deficit heading into the bottom of the ninth, Starbuck draftee Colin Richards had entered the game to close it out. Alex Budde and Adam Backes hit him right away with back-to-back singles to start the bottom frame. After a Gertken strikeout, Cole Schmitz hit a single to center to load the bases. Richards managed to overcome the pressure though as he struck out the next two batters to secure the 6-2 rocket victory.

Southpaw Alex Lotthammer had the start for Raymond and he had a quality start going six innings, allowing only four hits, no runs and striking out eight batters on 112 pitches. Tyler Steen helped the offense as he went 3-for-5 (two singles and a double) with three RBIs and a run scored.

Raymond will play Young America next Saturday in New Prague.

The crowd was loud, the dugouts were chirping, you could feel the tenseness in the air. Coaches were tossed, and in the end there was only one winner — Young America 5-1 over Jordan. This was a great night game here in New Prague to cap off the class C action for today.

Young America jolted right away as third baseman Isaac Herman led off the game with a double. He came around to score two batters later on a ground out to give the Cardinals an early 1-0 lead.

In the fourth inning Jordan came close to tying the game as Steve Beckman led off the bottom of the fourth with a double but got stranded at third.

In the fifth, the Brewers took advantage of some miscues by the Cardinals as the first two runners got aboard via dropped third strike and a bumbled fielder’s choice. With one out and the bases loaded, Steve Beckman hit a fly ball to center that scored the tying run. However, on the relay throw home a Brewer runner was caught between home and third and managed to make it back to third. This resulted in Cardinal manager Adam Kostecka getting tossed from the game.

Ultimately it proved to be a momentum changer as the Cardinals came out in the sixth guns blazing as they hit three consecutive singles to lead off the inning including the go-ahead RBI single from Roch Whittaker. After a strikeout from Josh Lenz, shortstop Kyle Horstmann hit a groundball to right field to score another run.

That would end up being the curtain call for Brewer starter Mitch Bockenstedt who lasted 5 ⅓ innings and striking out six. Scott Hollingsworth came in to do damage control. He struck out his first batter looking but it was followed by back-to-back RBI singles from Hunter Rickaby and Cole Peters to make it a 5-1 lead where it would stay the rest of the game.

The momentum carried over to Young America starter Josh Lenz, who retired 13 straight batters from a walk in the fifth to a Jake Lucas single in the ninth. The southpaw also fired 12 strikeouts allowing only two base hits and one run as he went all nine innings, throwing 145 pitches.

“The big factor of change came when the manager got tossed. It’s weird to say but it got us all fired up and it got me going good on the mound. This is my first year with these guys and they are fun to play with and I’m excited to keep this run going with them,” Lenz said.