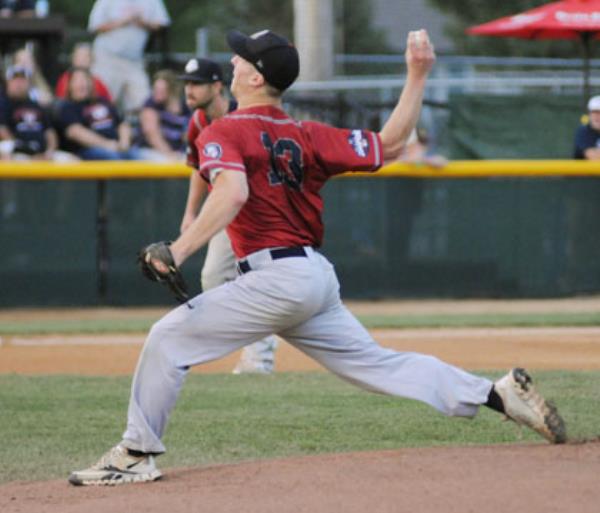 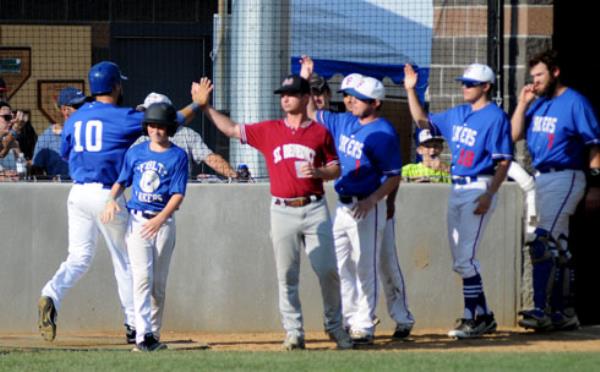 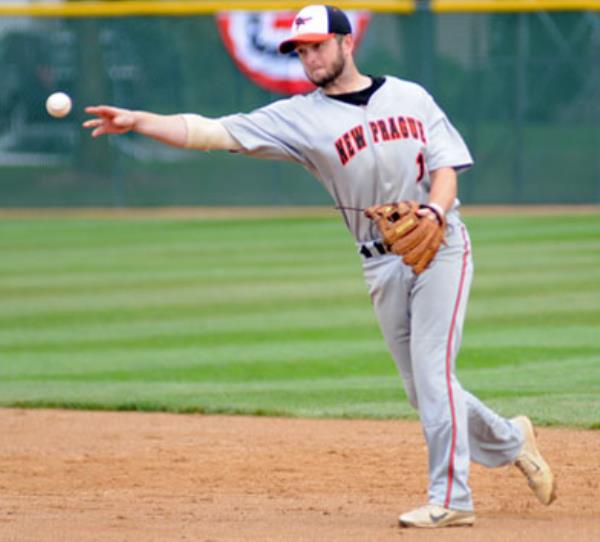 Kimball did it again Sunday against Belle Plaine in a 5-2 victory to keep its 2018 title hopes alive with a five-run seventh inning. Who had the go-ahead base hit? That’s right, Scott Marquardt. He came through with a two-run single to put the Express up 3-2 and give them their first lead of the game.

Jordan Joseph and Adam Beyer added RBI base hits to extend the lead to 5-2 and create another magical state tournament moment for Kimball.

Belle Plaine made a bid to dethrone the Express and took a 2-0 lead in the fourth inning. Matt Schultz singled with one out and Jared Miller got hit by a pitch to start a rally. Derek Dahlke hit a double to score Schultz and Pat Schultz grounded out to short to take a 2-0 lead.

Ben Johnson struck out 13 hitters in eight innings to keep things close. He gave up two runs on five hits and walked two but the defense behind him did not commit an error.

It was a tough-luck loss for Tigers starter Wes Sarsland, who pitched brilliantly through six innings. He ended up giving up two runs on six hits and struck out seven.

Sarsland gave way to Nate Herman with the bases loaded in the seventh, who plunked the first hitter he faced Brooks Marquardt to bring in a run. The Tigers threw out a runner at the plate for the second out but Kimball got on a roll with three straight hits.

New Prague served as the site for three Dakota-Rice-Scott League teams Sunday and Faribault made it 3-for-3 for DRS teams advancing after an 8-0 victory over Mora.

Three DRS teams reached the final eight last season and two of those teams are still alive this season after New Prague defeated Hanska 3-0 before Faribault took the field.

It might sound like a broken record but Faribault’s Matt Lane cruised through seven innings and extended his scoreless inning streak to 16 innings at the state tournament. He threw a three-hitter last weekend against Stewartville-Racine in a 2-0 victory.

Lane struck out eight, walked one and allowed just four hits to the Blue Devils Sunday. Jack Helgeson came on in the eighth to finish out the game for the Lakers.

The Lakers gave Lane a two-run cushion in the third inning against the Blue Devils after Derek Ritter drew a lead-off walk and Porter Sartor singled with one out. A stolen base and an error allowed Ritter to score and Blake Langerud’s sacrifice fly scored Sartor.

Faribault started a two-out rally in the fifth and got two runs in after Lane doubled down the left field line to score Mitch Johnson and Joey Grote.

The Lakers manufactured a run in the seventh when Grote reached on a dropped third strike. A wild pitch allowed him to advance to third and a sacrifice fly from Ryan Archambault scored Grote to make it 5-0.

Grote extended the lead to 8-0 in the eighth inning when he doubled with the bases loaded. Three runs scored and Grote finished 2-for-5 with two runs. The Lakers had just six hits in the game.

Defensively, the game was a disaster with both teams committing four errors.

Faribault will face Plato Saturday at 7:30 p.m. in New Prague.

New Prague doesn’t mind a longer path toward a state title evidenced by last year’s run to the final four and it looks like the Orioles could wind up there again.

New Prague advanced to the third weekend of the Class C state tournament with a 3-0 victory over Hanska at New Prague Memorial Park Baseball Stadium.

The Orioles defeated Ortonville 7-3 last Friday on the first weekend of the tournament, just like they won on the opening weekend last year.

New Prague got going in the second inning when Eric Wagner singled with one out. Then the rain came and an 18-minute delay resulted. It didn’t much matter for the Orioles and if anything it seemed to jump start them. Dan Shetka hit an RBI single after the delay to score Wagner.

New Prague added a run in the sixth after Zack Dubanoski got hit by a pitch to start the inning. After a sacrifice bunt he moved into scoring position and got to third on an error. Aaron Kes’ base hit, which hit Lakers pitcher Dayton Larson, scored Dubanoski.

Sprouls cruised through eight innings. He threw four innings of no-hit ball and allowed just one walk. He struck out nine and gave up just four hits for the game.

Hanska started to get a rally going with two outs in the bottom of the seventh when Brady Mosenden and Matt Suess collected back-to-back base hits. But Sprouls reared back and came up with his eighth strikeout to end the inning.

Eric Wagner had two hits and a run for New Prague, which had seven for the game.

The Orioles will move on to face the winner of Kimball Saturday at 1:30 p.m. in New Prague.

New Market started its quest toward a state title Sunday with a 4-3 victory over Fort Ripley at New Prague Memorial Park Baseball Stadium behind an all-around effort from Nate Rost.

The Muskies fell in their only game of the 2017 state tournament to eventual champion Kimball 5-3 but have visions of a lengthier run this season.

Rost drove in three of the four runs and finished 3-for-4 and a run. He also turned seven impressive innings. He struck 10 hitters, walked none and allowed two runs on eight hits.

The Muskies didn’t wait to start their journey and jumped out to a 2-0 lead in the first inning. Scott Lyden doubled with one out and Rost laced a double down the left field line to drive in the first run. Rost scored one batter later when Tyler Bergstrom also doubled to left field.

Fort Ripley tied the game in the fifth inning after Zach Heidmann hit a lead-off double. Ethan Branum singled to set the table for Brian Skluzacek hit an infield single to score Heidmann. Nick Jelacie followed with a double to score Branum and tie the game.

New Market responded with a pair of runs in the bottom half of the inning after Joe McKibben walked and Lyden got hit by a pitch. Rost delivered a single up the middle to score both runs and put the Muskies in front 4-2.

Fort Ripley got closer in the top of the ninth when Dustin Littlefield hit a lead-off solo home run to left field to cut the New Market lead to 4-3.