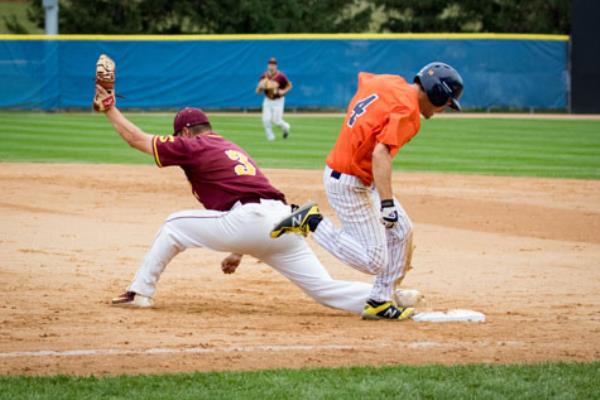 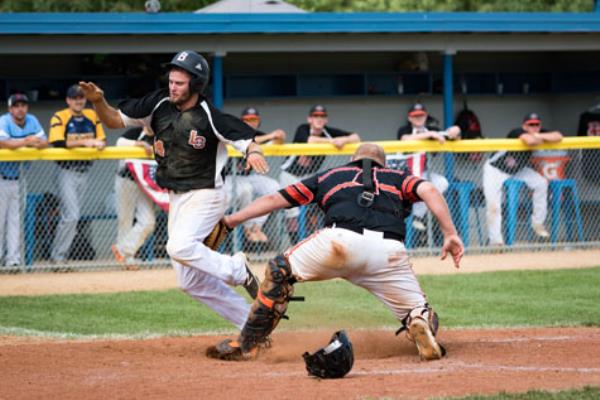 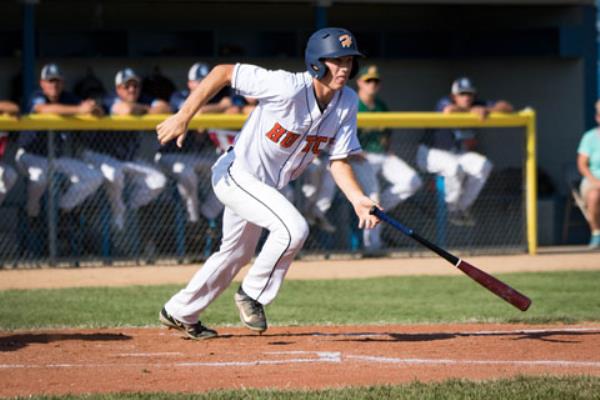 Those watching the Sobieski Skis have come to expect to see Tyler Jendro on the mound at the state tournament but this year there was a “3” in the position spot next to Jendro as he was the first baseman against Jackson.

Nonetheless, Jack Hegarty took the game into his hands today and he shined as Jackson was outmatched by him every inning in a 2-0 Skis victory. The first Bull to reach base was the ninth hitter, Shad Wacker, who reached on Hegarty’s only walk of the game. Wacker was thrown out trying to steal second base though to end the top half of the inning.

In the bottom half of that inning, Sobieski’s first two batters got out and leadoff hitter Beau Hanowski singled to center to start the two-out rally. After Scott Litchy got hit by a pitch, shortstop Collin Eckman drove Hanowski home on a line-drive single. Joey Hanowski followed up the next at-bat with another single to score Litchy.

Jackson once again tried to test the Skis’ catcher Riley Hirsch arm in the top of fourth after Easton Bahr led off the inning with a single, only to be gunned down by Hirsch. After Bahr was out Hegarty struck out five consecutive batters to have nine strikeouts after five innings on the mound.

On the other side of the hill Tyler Tennyson, a draftee from Fairmont, started for Jackson and went 6 ⅔ innings allowing only six hits, two runs and striking out five.

Those two runs proved all the Skis needed as Hegarty went the rest of the game allowing only three runners on base via one hit, one walk and one error. He struck out 15 batters on 131 pitches and just frustrated the Bulls the whole game.

“We had a discussion before the game about who would take the mound," Hegarty said. "I’m glad they chose me. I had my fastball working for me and it was just very effective. We’re just happy to make another run in the tournament, it’s an exciting feeling."

Sobieski will face New London-Spicer on Saturday in Shakopee at 11 a.m.

Lake City has big eighth inning to get past Milroy

The bats were dull to start the game as both teams were playing strong defense and not willing to give the other side the edge until Lake City pulled away with a 3-1 win.

Milroy stranded two runners in each of the first two innings. Lake City, which is appearing at the state tournament for the first time since 1972, also had a chance with bases loaded in the top of the fourth but struck out to end its threat.

The Yankees took the lead in the bottom of the fourth when first baseman Riley Carpenter hit a 350-foot shot down the left field line. That would be the only run for most of the game and being the only run for the Yankees.

Milroy starter Nathan Deutz carried his quality start into the seventh inning as he was relieved with the other Deutz on the roster, Austin, with one out in the seventh. Austin managed to leave the Serpents with two runners on to escape a seventh-inning jam. Nathan’s final line was 6 ⅓ innings, six hits allowed with no runs given up on 76 pitches.

Lake City started out the eighth inning with a walk and a single from Matt Miller. The Yankees turned to Tyler Vaughn to try and get out of the jam. Vaughn walked his first batter to load the bases with no outs.

Josh Matanich entered the game to pinch hit and delivered with a hard hit ground ball that managed to get past the first baseman to tie the game. With one out, Hunter Baab delivered a line drive to left to score the go-ahead run. Brett Gwaltney delivered a two-out single to center to add an insurance run that ended up scoring Matanich.

Logan Thomas added another run in the ninth with a sacrifice fly that scored John Brown (his second run scored of the game). Kyle Sursely entered the game in the eighth inning and only walked one batter as he sent the Yankees down 1-2-3 in the ninth to secure the win.

Ryan Wolfe was the starter for the Serpents. He went seven innings allowing seven hits and one run while striking out five.

“I was in a similar situation in the regional tournament," Martanich said on the pinch-hit scenario. "It was the 13th inning and I went in to pinch hit and got the walk-off hit. I knew going into the weekend that I probably was not going to start but I got my opportunity and glad I could come through for the guys”

Lake City will face Buckman on Saturday in Shakopee at 1:30 p.m.

Do not let the 12-2 final score in Hutchinson's win fool you. This game was close at the beginning until the Huskies pounded Lastrup for eight runs in the fifth.

Hutchinson started with two runs in the first inning. Jayden Fleck led off with a single and got sacrificed over to second. With two outs, designated hitter Jake Wendland drove Fleck in on a deep single to left center. The pitcher Evan Kohli then smashed one deep to center for a double to score Wendland and make it a 2-0 lead early.

Lastrup managed to tie the game in the top of the third. Lakers pitcher Chad Weiss was patient and walked to start the inning. Paul Herman followed with a single and the other Herman walked to get the bases loaded with one out. Catcher Reggie Litke also walked (Kohli’s third walk of the inning) to score Weiss. Jason Sadlovsky grounded out to first to score the tying run and suddenly the game was tied.

The Huskies got a run back in the bottom half as Fleck again led off with a single and scored two batters later on Jayden Juergensen’s double.

The real damage then struck in the fifth inning. Lastrup had already pulled Weiss in the third inning and Preston Rocheleau had entered the game. The first three runners got on by single, single, walk. In the midst of that Wendland tried to steal second and a wild throw scored Juergensen. The bases got loaded again and Jeremiah Van De Steeg hit a sacrifice fly to center to make it 5-2.

With two outs and the bases loaded, Fleck walked to score another run. Matt Piechowski hit home two more runs on a single. Juergensen got his second RBI on a single immediately following. Wendland cleared the bases with a double that capped off the eight run inning for the Huskies.

With an 11-2 lead, the Huskies entered the seventh inning with Fleck leading off. He hit a single and scored his fourth run of the game on Juergensen’s fourth hit of the game, a single to end it.

Evan Kohli went six innings for the Huskies, allowing seven hits and only two runs scored on 119 pitches. Despite giving up six walks he did strike out eight and got himself out of a few jams throughout the night.

The one through five hitters for Hutchinson managed to go 14-for-19, 10 runs scored combined with 10 RBIs.

Hutchinson will face Sleepy Eye on Saturday in Shakopee at 7:30 p.m.

Fans witnessed Chris Odegaard go into a pitching duel last year against Sobieski in Green Isle. Tyler Jendro was the victor in ending the Blue Jays season. This year, same story; Odegaard in a pitcher’s duel against Reed Pfannenstein of Luxemburg but Odegaard and Plato prevailed 1-0.

Luxemburg began showing signs of offense first as it threatened in the third inning. With two outs, the Brewers hit back-to-back singles to have runners on the corners. Austin Klaverkamp hit a fly ball to center to end the Brewers' half.

In the bottom half of the frame, the Blue Jays' Chris Odegaard doubled with two outs and his brother, Matt, followed by walking. Tyler Lang grounded out to end the scoring chance.

Odegaard went on cruise control from there as he retired 17 straight batters from the fifth inning into the ninth inning.

Plato managed to get a run with a two-out rally in the seventh inning. Mitchell Boesche got hit by a pitch. Chris Odegaard went to the plate next. With two strikes against him, he crushed a pitch to deep left center to score Boesche for the only run of the game.

In the ninth inning, Sam Iten led off with a blast to right field that was 15 feet short of a home run. After the right fielder bobbled it at the wall, Iten rounded second and tried to make a triple but a solid relay throw beat him to third base.

The next two batters hit back-to-back singles and suddenly Luxemburg had life again as it had runners on second and first with just one out. Odegaard managed to strike out Isaac Matchinsky for the second out and followed by getting Derrick Orth to fly out to right to end the game.

Pfannenstein for the Brewers pitched a complete game going eight innings allowing only six hits and the one run and striking out eight.

Chris Odegaard had a finishing line of nine innings pitched, seven hits allowed, no runs and walking none while finishing with eight strikeouts.

“It sucked last year watching the season end in a pitchers' duel," Chris Odegaard said. "This year I was determined to win this and hopefully we can get a chance to avenge the loss against them (Sobieski). I felt the stress late in the game and I just had the attitude of giving them everything I had. It’s about taking advantage of any chance you get and capitalizing on it.”