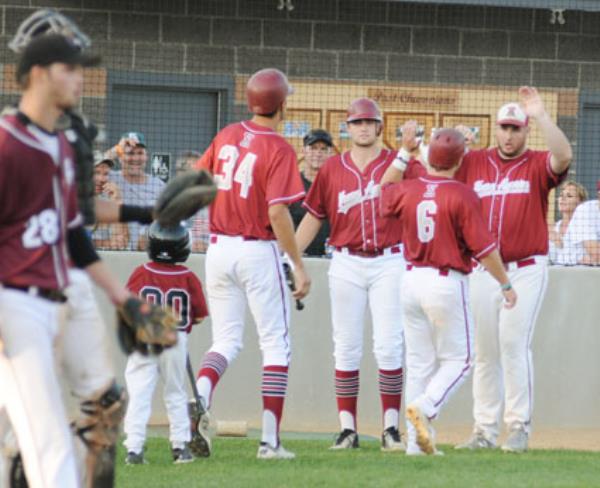 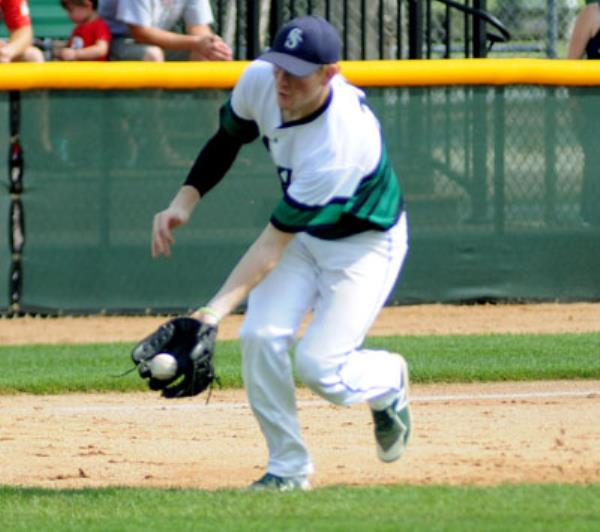 It took 14 innings, but someone finally crossed home plate.

Sartell center fielder Ethan Carlson scored on an error in the top of the 14th inning as the Muskies edged the Red Wing Aces 1-0. Muskies catcher Cody Partch made the contact on Carlson’s score, reaching on an error too.

Partch saved the game earlier in the bottom of the 13th when he tagged out Red Wing first baseman Josh Thygesen. The Aces had the chance to win when left fielder Mitch Matter singled to deep left field, but Muskies left fielder Tim Burns scooped up the ball and rifled it to Partch in time for the tag at home plate.

The Aces got two on in the bottom of the 14th but couldn’t get a runner across. Muskies pitcher John Schumer earned the save in relief of Max Koprek, who earned the win.

Deminsky, the 10th-year veteran Muskies veteran, kept his pitch count low and had his way against the Aces. Muskies fielders kept the Aces’ longest contacts of the day off base. It took until the seventh inning for the Aces to get a runner on third base, the Muskies fielded a pop up to escape. Demnisky also didn’t walk a batter until the ninth inning.

Tauer, a recent Red Wing High School graduate, put away the Muskies with two runners left on base in the first and fifth innings. The St. John’s University recruit also struck out his seventh batter with two outs and bases loaded in the sixth inning to keep the game tied. He exited the game after the sixth with his pitch count at 115.

Koprek came in for Deminsky in the 11th. Koprek started slow with a four-pitch walk but kept the Aces in check after that. The former Valley City State (N.D.) pitcher got some extra help when Muskies catcher Cody Partch made a game-saving tag out at home in the 13th.

During the first nine innings, Schumer, playing designated hitter at the time, started his team’s best opportunity to score with a line drive to center field with two outs. He got two on base, and the Muskies added another on base with an error before Tauer retired his seventh batter.

Red Wing’s best scoring chance during the first nine innings came in the seventh when third baseman Kyle Blahnik hit a two-out single followed by a Muskies error. Blahnik reached third on the error, giving the Aces runners on the corners, but the next batter popped up in ending the inning.

Kimball right fielder Ben Johnson hit the only run over the fence that the defending state champion Express needed in their 2-0 win over the New Prague Orioles.

Johnson went 2-4, including his home run in the fourth inning for a 1-0 Kimball lead. Catcher Scott Marquardt added an insurance run with an RBI double to score left fielder Austin Ruehle in the seventh.

New Prague, the host team, had its chances with two runners on in the third inning after a single by center fielder Zack Clark. Catcher Dan Novak gave the Orioles momentum in the eighth, but Wallner struck out left fielder Eric Wagner next to end the top half of the eighth.

The Orioles also got three on in the ninth, but Express closing pitcher Alex Kendall threw 11 strikes and allowed no hits in earning the save. Aaron Kes and Jake Klein reached on fielder’s choices, and Dan Shetka was walked.

Orioles pitcher Nathan Sprouls kept his team within striking distance. He went six innings and struck out 11 batters. He allowed one earned run on six hits.

Josh Lenz did his part on the mound for Young America and caught a couple breaks on the base paths as the Cardinals edged Raymond 5-4.

Lenz threatened to steal from second base in the eighth inning with the game tied 4-4. An errant throw to second gave him an easy run to third. He then got home easily after the next Raymond throw passed third and ended up in the Cardinals dugout.

On the mound, Lenz struck out 15 batters in 8.67 innings for work for the win. He allowed two earned runs on seven hits, and he walked two.

Raymond scored two of its run on errors. Young America had three errors, and Raymond had five, including the ones in the eighth that sent Lenz home.

Raymond jumped ahead early with a three-run first inning. With bases load, Rockets designated hitter Zach Nelson hit a two-run single to score Mike Jeseritz and Tyler Steen. First baseman Jordan Smith made it 3-0 when he scored on an error.

Young America loaded the bases and answered in the third to tie 3-3. Cardinals center fielder Brice Panning singled to drive in Hunter Rickaby and Cole Peters. Third baseman Isaac Hormann added a run while pitcher Josh Lenz grounded out at first base.

Raymond reclaimed the lead in the bottom of the third, 4-3, when Smith singled home Jeseritz. Young America tied the game 4-4 in the fourth when Panning’s RBI single brought Peters home.

Colton Vien and Alex Lotthammer split time on the mound. Lothammer had six strikeouts in 5 1/3 innings, and Vien had three in 3 2/3.

Alex Twenge, Young America’s tournament draftee from Green Isle, came in for the Cardinals in the ninth and ended the Rockets’ chances. Twenge threw a strikeout to end the game, leaving two Rockets base runners stranded.

Something had to give.

Neither Plato nor Faribault allowed a run in the whole state tournament going into their late Saturday-night class, which started an hour-and-half late due to long early games. It took a chaotic final play with a broken bat and a throw to first bouncing off the ground to decide a pitching duel between two former minor league hurlers.

Plato right fielder Tyler Lang darted home for the game-winning run as the Blue Jays edged Faribault 1-0. Blue Jays center fielder broke his bat in the final at-bat, and Lakers pitcher Matt Lane took a fielding error as Lang scored. Lane tried to get an out at first but the ball bounced off the ground and hit Ryan Archambault in the face.

Archambault didn’t get up right away, which left the end of the game with a somber mood for both teams momentarily. He eventually got up on his own power.

Both teams had crisp fielding throughout as only errors came on the last at-bat.

Plato threatened in the first inning, but the Lakers turned away the Blue Jays with a double play by Joey Grote, Porter Santor and Archambault. The Blue Jays got runners in the corners during the third when shortstop Odegaard singled with two outs, but the Lakers escaped with a groundout.

Faribault put two runners on in the top of the fourth inning when left fielder Blake Langerud got walked and designated hitter Mitch Johnson singled. Blue Jays left fielder made a tough catch on the next at-bat, and Odegaard retired the side with a strikeout.

Lane answered similarly in the bottom of the fourth when Blue Jays put two runners in scoring position. Designated hitter Adam Prehn ripped a ball into right field as catcher Nolan Lepel hurried to third base. The Lakers caught a pop up next, and Lane threw a strikeout afterward to end the inning.

Lane tried to go yard in the top of the seventh to right field, but Blue Jays right fielder Tyler Lang made the grab. After another fly out, Chris Odegaard retired the side with a strikeout. The Lakers tried working the basepaths instead in the top of the ninth. Langerud singled, and Johnson moved him to second on a sacrifice bunt. It cost the Lakers as Chris Odegaard struck out Grote next followed by Lane’s fly out.

Lang then put the Jays in scoring position to open the bottom of the ninth with a shot to the bottom of the left field fence for a stand up double. While Lane answered with a strikeout next, he and the Lakers ran out of answers during the following chaotic last at-bat.