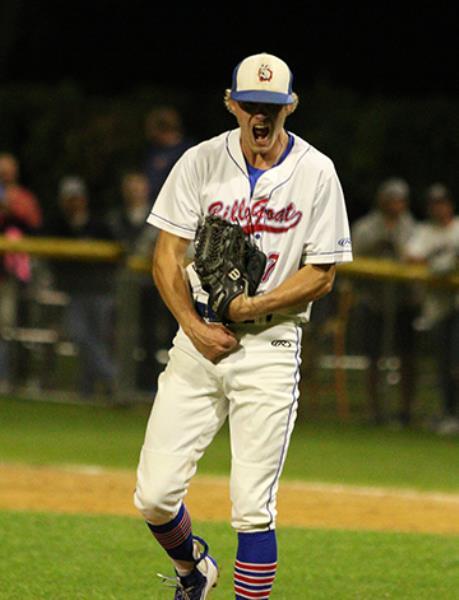 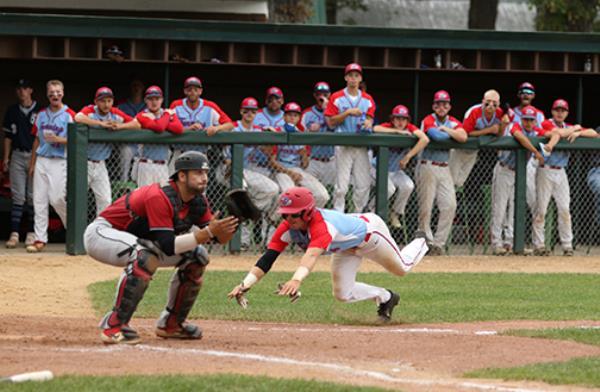 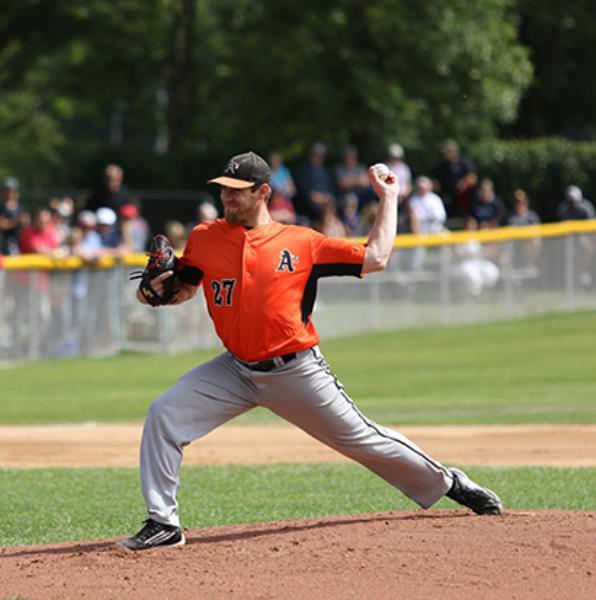 The Buckman Billygoats won a marathon game Saturday night that almost went into Sunday morning, if not for a steal of home.

In the 17th, Joe Kahl singled, stole second and moved to third on a passed ball. Seeing an opportunity when the catcher tossed the ball back to the pitcher, Kahl stole home to give the Billygoats a 3-2 win over Young America.

The game went so long thanks to dueling pitchers. Buckman's Matt Tautges went 15 innings, struck out 11 and allowed 13 hits, while Josh Lenz went 14 innings, allowed five hits and struck out 17.

The Billygoats got on the board by sandwiching an error with a pair of hits. Aaron Weber singled and then scored on a double from Mark Kahl. The Cardinals kept the damage to a minimum by throwing out a second advancing runner at home, ending the inning down just 1-0.

The score came just after Young America nearly scored in the previous half inning, when Hunter Rickaby was hit by a pitch and Isaac Hormann walked. A single from Brice Panning nearly scored a run, but the runner was tagged out at home to keep the Cardinals off the board.

Buckman added to the lead in the sixth on one swing of the bat. Weber sent the ball to the fence and legged out a triple, scoring on an error to double the lead at 2-0.

The Cardinals finally got on the board in the seventh. Blake Pistulka singled, Cole Peters ran out a grounder and Brandon Stender hit a single to load the bases with one out. Hormann won the bang-bang play at first to allow the run to cross the plate instead of an inning-ending double play, putting the Cardinals down 2-1 after seven innings.

Young America then knotted the game in the eighth. Matt Mann hit a lead-off single then stole second and moved to third on a dropped third strike. An RBI single then evened the score at 2-2, with Barrett Panning delivering the hit.

Five runs on two hits was more than enough offense for the Farming Flames on Saturday, as their pitcher went nine innings with no earned runs in the 5-1 win over Raymond. Scott Lieser (draftee from St. Martin) scattered five hits across nine innings with 10 strikeouts and only two walks in the win.

Four Farming batters had multi-hit games to lift the Flames. Ethan Navratil had three hits, while Isaac Nett, Cody Fourre and Tylor Schroeder each had two.

The Farming offense got going early when Nick Mergen singled and Brad mergen walked to set up an RBI single from Aaron Eiynck in the second inning. Isaac Nett and Ethan Navratil singled in the third inning, leading to a scores on a fielder's choice and a Brad Mergen single to put the Flames up 3-0.

Farming then added to their lead in the fifth after it looked like Raymond's Austin Versteeg would get himself out of a jam. Following singles from Nett and Navratil to start the inning, Versteeg struck out the next two batters. But after a full count walk to Brad Mergen, Tylor Schroeder delivered a two-out double to drive in a pair of runs and move the Farming lead to 5-0.

The Rockets would later get on the board, though it was not enough to close the gap. John Sawatzky and Jon Broman both singled in the fifth before a wild pitch gave the Rockets their first run of the game and put the final score at 5-1.

With another stellar pitching matchup, a couple plays that could have gone either way proved to be the difference in the 4-2 victory for Bemidji over Cologne.

In the second inning, the Blue Ox put a pair of runners on following a walk to Connor McNallan and a Zach Braun single. Bemidji then put runs on the board with a Collin Rutledge single and a grounder from Brazil Zuehlke. What would have been the final out of the inning, a third strike into the dirt could not be corralled by the Hollanders, allowing one more run to cross the board to put Bemidji up 3-0.

While the Blue Ox got the extra run on a close play, the Hollanders weren't so lucky when Rutledge made a diving catch in the third inning to keep Cologne's damage to a minimum. At that point in the inning, the Hollanders had two runners on and no outs following hits from Joey Lilya and Zack Nelson. Had the ball gone through, more runs could have crossed, even though Cologne tacked on two runs later in the innings following back-to-back RBI singles from Casey and Carter Clemensen.

After the six runs were scored in the first three innings, both pitchers locked down the opposing offenses. Ethan Opsahl went all nine innings with 12 strikeouts, six hits and no walks to earn the win, while Christian Johnson struck out seven in eight innings with six hits given up.

After being robbed of what looked like the game-winner, the Jordan Brewers made sure there was no doubt about the next hit when winning the game in the bottom of the 12th.

With Adam Kalal on second base after a single and a player hit by a pitch, Joe Lucas sent a deep shot to the outfield that had the promise of driving in the first run of the game. Fergus Falls right fielder Jack Heideman had other ideas and tracked down the ball near the wall to send Kalal sprinting back to second. Not wanting to squander what was one of few scoring opportunities, Scott Hollingsworth belted the ball to left field to score the only run of the game in the bottom of the 12th.

Joe Lucas earned the win in 2/3 off an inning with a pair of strikeouts, pitching in relief after Nate Beckman scattered six hits across 11 1/3 innings with six strikeouts. Peter Gaustad went 10 innings for the Hurricanes with eight hits allowed for Fergus Falls.

With both pitchers bringing their best stuff, there were few chances to score, as evident by the 1-0 12 inning result.

Midway through the game, the two sides exchanged scoring opportunities. Jordan loaded the bases in the bottom of the fourth with only one out, following a Nate Beckman single, an error and a walk to Devyn Ulibarri. Fergus Falls pitcher Jonathan Draheim struck out the next batter and forced an easy pop fly to end the inning to keep the game scoreless. Then in the top of the fifth, Jack Heideman singled before an error and a fielder's choice put runners on the corners. Once again the defense won out and the two sides remained deadlocked at 0-0.

Kalal led the Brewers with three hits and scored the winning run. Jake Anderson and Jack Heideman each had two hits for the Hurricanes.