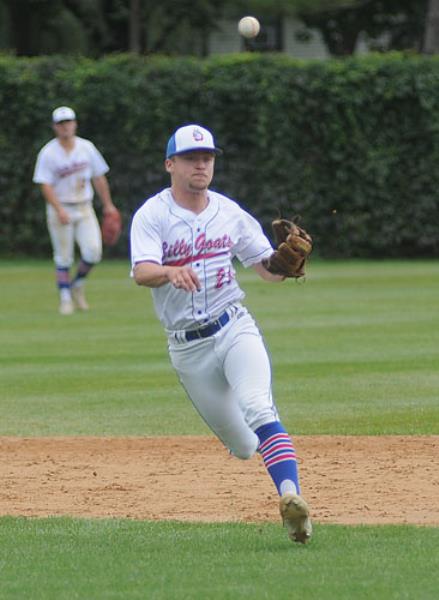 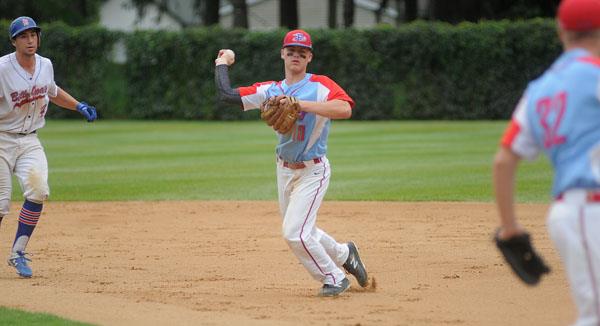 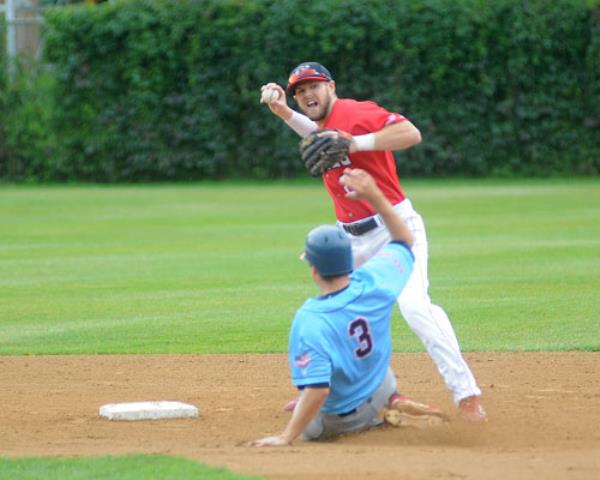 It started fast but Farming faded as Buckman continued hit Sunday in a 5-1 win to advance to the final four.

The Flames jumped out to a 1-0 lead in the top of the first when Taylor Fourre scored on Ethan Navratil’s ground rule double but that’s all they got for a while. Farming went hitless until the sixth inning and didn’t get a runner to second base the rest of the game.

The Billygoats answered back in the bottom half of the inning when Matt Tautges drew a lead-off walk and Lane Girtz singled to set the table. Matt Kummet loaded the bases after getting hit by  a pitch and Aaron Weber singled to score Tautges. Girtz later scored on a ground ball from Noah Boser to give Buckman a 2-1 lead.

The Billygoats turned to Chad Weiss, a draftee from the Pierz Lakers, to pitch after Jeremy Monson started. Weiss threw two innings the previous night in a 3-2 17-inning win over Young America. Weiss went eight innings and allowed no runs on three hits against Farming. He struck out six and walked none. Weis set down the side in order his first four innings of relief.

Brad Mergen also got an early hook for the Flames. He went 3 ⅓ innings, gave up four runs on three hits, walked one and struck out none. Eli Emerson, a draftee from Richmond, came on in relief. Emerson lasted 3 2/3 innings and gave up one run on three hits. Emerson struck out two and walked one.

Buckman struck for a pair of runs in the fourth to chase Mergen. Aaron Weber scored on a while pitch and Noah Boser scored on a ground out. The Billygoats reached base twice on hit by pitches.

Buckman extended the lead to 5-1 in the fifth inning after Girtz scored on a ball hit deep to the hole at second base. Girtz reached base after getting hit by a pitch, moved to second on a passed ball and reached third on a fly ball to right field. He scored as the second baseman didn’t decide in time to throw home or throw to first to get the out. He chose to go home but Girtz slid in safely. Girtz finished 2-for-3 with two runs and Weber went 2-for-4 with an RBI. Boser had an RBI but later left the game with an injury.

The Billygoats will face Jordan Sunday night at 7 p.m. in Maple Lake. The Brewers beat Bemidji 4-2.

After missing out on a spot in the final four last season, New Market is headed there following a 1-0 win over Red Wing Sunday in Delano.

The Muskies missed out last season following a 4-3 loss to Young America in 14 innings but Tony Vocca helped push them through behind a dynamite performance on the mound. Vocca allowed eight hits in a complete game for the Muskies. He walked one and struck out eight to keep the Aces scoreless.

New Market jumped ahead 1-0 in the bottom of the first when Danny Phyle hit a leadoff double and scored on a single from Andy Henkemeyer.

It was a good thing they got that run then because Red Wing’s starter Keith Meyers, a draftee from Cannon Falls, locked in the rest of the way. He held the Muskies to five hits in eight innings. Meyers struck out five and walked two.

The Aces missed an opportunity in the top of the fourth inning when they strung together back-to-back two-out singles. Kyle Blahnik singled but Corey Tauer got thrown out at the plate when the throw from center field came in plenty of time.

New Market had a chance to add to the lead in the bottom of the eighth when it loaded the bases with nobody out. But Red Wing got a double play and a fly ball to right field to get out of the inning.

The Muskies will meet Hutchinson, a 3-0 winner over Waterville, at 4:30 p.m. in Maple Lake for a spot in the state championship game.