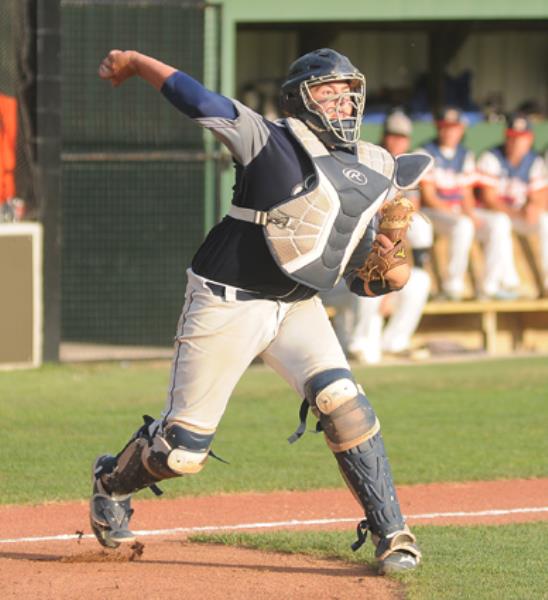 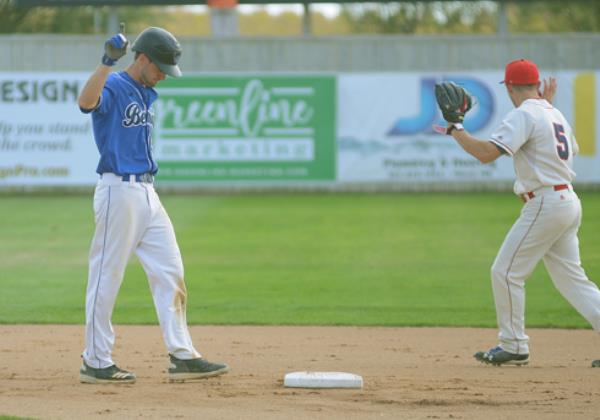 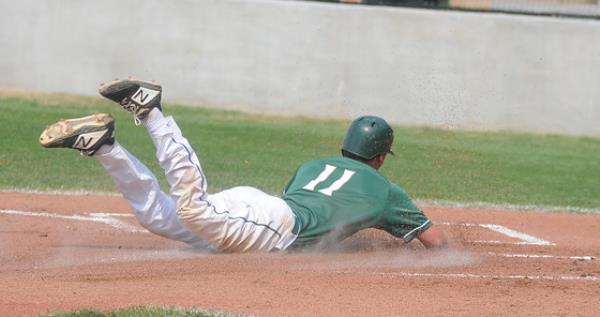 Players accomplish incredible feats and experience heavy heartbreak at the state tournament and that’s what makes it special.

Bluffton got to experience the incredible feats Sunday with a thrilling 1-0 victory over Sartell to advance to the final eight.

There it is the final out. Bluffton advances with 1-0 marathon win over Sartell pic.twitter.com/6tsGTcCa8p

Justin Dykhoff singled with one out and Kyle Dykhoff reached on a fielder’s choice. Josh Dykhoff hit an infield single to quietly start a threat that eventually turned into a roar when Wyatt Hamann hit a smash to short, which got mishandled as the Muskies tried to get the ball to second for a force out. Meanwhile Kyle Dykhoff rounded third and scored the only and winning run of the game.

The Braves hadn’t had a hit since the fifth inning as they battled against Sartell ace David Deminsky. But when Adam Wenker came on to start the 12, Bluffton became reinvigorated.

For the previous 11 innings Braves pitchers traded zeroes with Deminsky while strikeout totals piled up. Jake Dykhoff threw eight innings and allowed five hits. He walked two and struck out 14 as he announced his presence to the rest of the state as a budding ace. After he came out Justin Dykhoff picked up where he left off. Justin Dykhoff threw four no-hit innings to pick up the win in relief, which Jake can likely live with.

Deminsky delivered as usual, striking out 21 in 11 innings. He gave up three hits and walked two.

The Muskies experienced the heartbreak end of the state tournament when it couldn’t cash in on their chances. Sartell had a prime opportunity to win the game in the eighth inning when Jake Dykhoff issued two walks and the Muskies loaded the bases on a bunt single from Ethan Carlson. Then Jake Dykhoff got tougher and struck out the Nos. 3-5 hitters to end the inning, picking up No. 12, 13 and 14 along the way. He ended stranding nine Sartell base runners, picking up inning-ending strikeouts in the second, fourth and eighth innings. Justin Dykhoff added an inning-ending strikeout in the ninth and 10th innings.

Bluffton fired up with another inning ending K pic.twitter.com/UlltiPncdO

Bluffton had few scoring chances but its best came in the fifth inning when it put runners on the corners with two outs but Deminsky ended the inning with a strikeout.

The Braves move on to face St. Patrick Sunday at noon in Milroy.

Bemidji’s power had a little flavor to it Saturday in Milroy against Prior Lake -- in the name of Bazil Zuelhke.

Zuelhke’s solo shot to right field started a four-run rally that put the Blue Ox in control the rest of the way in an 8-1 victory in Milroy. Zuelhke finished 2-for-3 with three RBI.

The top of the order kept things going by collecting three consecutive two-out base hits. Cody Rutledge drove in a run with his base hit and following a walk to Otto Graham, Furner Storm laced a double to the corner in left field to bring in two more runs to push the lead to 5-1.

The game remained tied prior to that as the two teams exchanged runs in the first inning through some manufacturing. Lead-off hitter Johnny Houston put the Mudcats up 1-0 he moved to second on a sacrifice bunt, then to third on a groundout before Alex Watterman’s infield single allowed him to score.

Bemidji wasted no time getting back in the game. In the bottom half of the inning, Blue Ox lead-off hitter Mitch Hendricks doubled and Connor McNallan followed with a single. A double play ground ball allowed Hendricks to cross the plate and tie the game.

Bemidji had a chance to add more runs in the third inning but couldn’t collect a hit after putting runners on second and third with one out.

The Blue Ox had the same situation in the sixth and again came away empty handed.

The Mudcats put a runner on third in the sixth inning but Bemidji starter, Ethan Opsahl, a draftee from Ada, got consecutive strikeouts to end the inning.

Hendricks singled in his first three plate appearances and finished 3-for-5. Storm also had a multi-hit game by going 2-for-4.

Opsahl scattered nine hits but managed to limit any damage by relying on his defense. Opsahl only had three strikeouts but threw eight shutout innings after the first inning

The Blue Ox will face Cold Spring Sunday at 3 p.m. in Springfield.

Carver’s glass slipper shattered into a million pieces Saturday in the first inning in Milroy as St. Patrick took a sledgehammer to it with a 16-4, eight-inning win.

The Black Sox entered the Region 7C tournament as the No. 8 seed and won two elimination games to capture the No. 4 seed. Carver proceeded to win its next two games at the state tournament after beating Clinton 14-2 in seven innings and knocking off Region 12 champion Delano 4-2.

The Irish, which opened the tournament with a 5-1 win over Regal and a 10-1 win over Rochester, took advantage of two errors, four walks, three singles and wild pitch to score six runs in the first inning.

Carver starter Mark Ulrich lasted ⅔ of an inning and gave up all six runs, five earned and walked four. Torben Urdahl, a draftee from Cologne fared about as well as Ulrich. He went 2 ⅓ innings, gave up six runs as well in the third inning with five of them earned. He walked two and struck out one before giving way to Jacob Booden.

St. Patrick, which finished with 16 hits, kept hitting whoever trotted out to the mount. Three Irish hitters had three hits in the game. Kyle Rhodus, Seth Ambroz and Dom DeLuca each had three hits. DeLuca drove in two runs and Rhodus one. Meanwhile Zak Endress drove in three runs, one on a bases-loaded walk and two on a single in the third. Bryce Simon drove in two runs in the eighth with a double down the right field line and Carver’s fourth error of the game gave the Irish a 16-3 lead.

Carver kept coming in the bottom of the eighth and pushed a run across on a St. Patrick error to make it 16-4.

Carver’s leadoff hitter Connor Cornell hit a home run to left center field on the first pitch he saw to temporarily make it a 6-1 game. The Black Sox later got another run in the third inning when David Dolan singled to score Dan Gastuch who hit a two-out double.

St. Patrick will face the winner of Bluffton-Sartell Sunday at noon in Milroy.