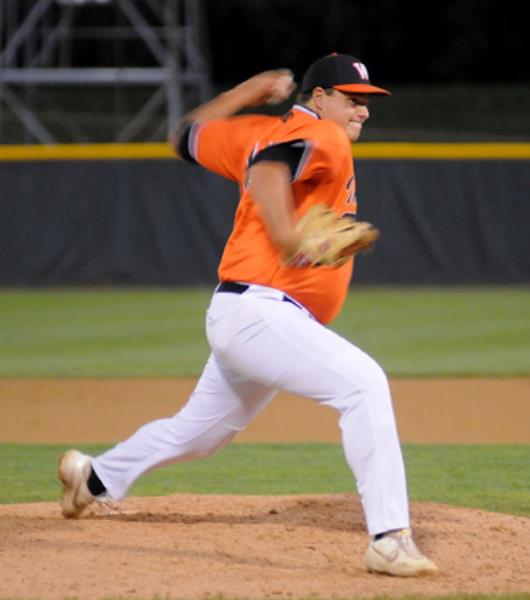 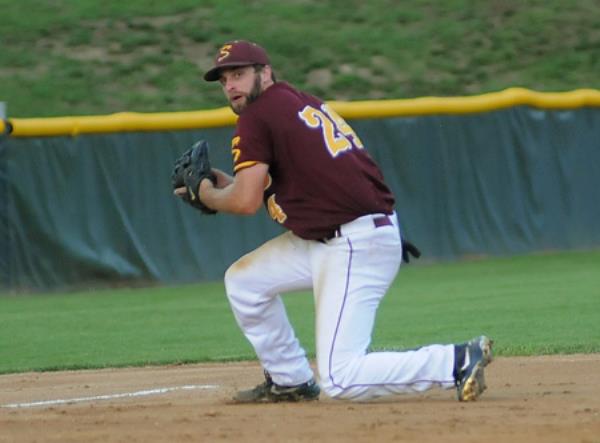 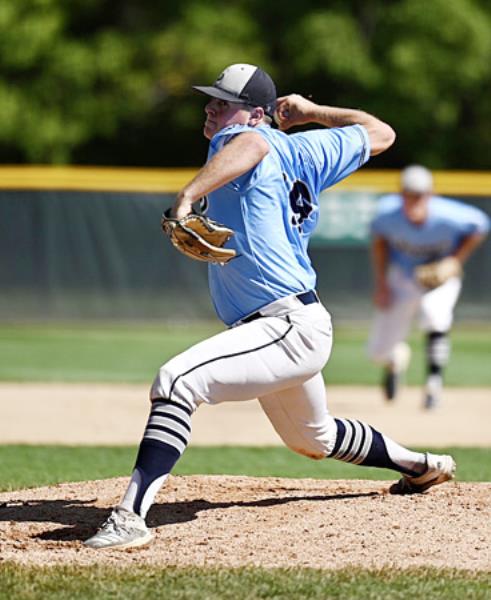 Southpaw Dalton Grose pitched a three-hitter Sunday night at Chaska Athletic Park for Eagle Lake, propelling the Expos to a 3-0 victory over the Luverne Redbirds. The Waterville Indians draftee walked six and hit one batter while striking out six.

Luverne loaded the bases in the bottom of the ninth and had the potential winning run at the plate in the person of three-hole hitter Newt Johnson. The Redbirds' first baseman worked a full count. He took a rip at Grose's 140th pitch, but missed. With that the Expos advanced to the round of 16.

The Expos had runners aboard in every inning except the first and seventh. Grose and the Expos fielders were able to keep all 13 Redbird runners from scoring. Right fielder Matt Helget made a running diving grab on Redbirds' DH Codie Zeutenhorst for the first out in the ninth. Kendall Meyer coaxed a walk. Then Grose plunked nine-hole hitter Gaige Nath to put runners on first and second. Leadoff hitter Derek Lungren forced Meyer at third on a grounder to shortstop Matt Werk. Phil Paquette drew a walk to load the bases with two out, setting up the dramatic final at-bat.

The game was scoreless through the first three innings. Expos cleanup hitter and first baseman Jake Schreiber led off the top of the fourth with a double down the left field line. Two outs later Helget hit a shot too hard for Redbirds shortsop Skyler Wenninger to handle, putting runners at first and second. Travis Noreu drew a six-pitch walk to load the bases. Second baseman Tony Ross, batting ninth for the Expos, slapped one to right plating Schreiber and Helget and giving Eagle Lake a 2-0 lead.

The Expos added one more in the fifth on singles by Owen Atherton, Seth Guetter and Luke Johnson, the last two coming with two out.

Jake Haugen pitched a strong game for the Redbirds, but took the loss. The right-hander allowed only two earn runs over five innings on six hits and one walk while striking out seven. Brandon Alfson, a Pipestone A's draftee, entered in the sixth and fanned the first five batters he faced. He finished with eight Ks. He allowed only two hits and the only other runner against him reached on an error.

Eagle Lake will take on the Watertown Red Devils on Saturday, Sept. 4, in the 1:30 p.m. game at Waconia.

Ryan Soderquist's two-run opposite-field home run over tbe right field fence at the Chaska Athletic Park in the bottom of the ninth inning turned a 6-3 deficit to 6-5. Logan Kalis followed the homer with a single, but Sobieski draftee Chad Weiss retired the final two Isanti hitters to notch a save. The Skis advanced to the round of 16 with a 6-5 win and will face Dumont in Waconia on Saturday.

Sobieski scored early and often, plating two in the first, one in the second, and three more in the fourth. Josh Wenzel led the attack going 3-for-5 with three runs batted in. Beau Hanowski scored twice for the Skis.

Sobieski starter Caleb Strack, a Randall Cubs draftee, got the W. He allowed two runs on four hits, walked three and hit one while striking out four. With his pitch count at 118, he gave way to Weiss, a draftee from the Pierz Lakers, after issuing a walk in the bottom of the seventh. Despite allowing the homer, Weiss picked up the save.

The Redbirds narrowed the lead to 6-2 in the fifth. Jeff Bowman singlee and Joe Tholsky walked. Soderquist reached via error to load the bases. Kalis, the cleanup hitter, hit a double into the left-center gap and the first two runners scored, but Soderquist was caught at home as the Skis worked a perfect relay left field to shortstop to catcher. They manufactured a run in the seventh, with Soderquist coming home on a sacrifice fly to right by Blaze Hogie to cut the lead to 6-3.

Strack gave up two earned runs over six inninngs on four hits. He walked three and struck out four. Weiss allow three runs, two of them earned. He struck out two and walked none.

Righty Jake Dyhkhoff pitched a complete game Sunday afternoon at the Chaska Athletic Complex and a three-run third inning was all he required to notch the victory that propelled the Bluffton Braves into the round of 16.

Dyhkhoff allowed a run in the first as Carver's first two hitters reached. Connor Cornell opened the game with a double that one-hopped the fence in left-center. Kyle Dalton then hit a smash that was too hot for Bluffton shortstop Payton Rondestvedt to handle. The Black Sox managed only three more hits the rest of the way. Dykhoff struck out nine and walked only two in his 111-pitch gem. The game ended after he walked Ben Alexander in the top of the ninth. After a fly-out, he got pinch-hitter Dave Dolan to bounce into a 4-6-3 double play to end the game.

Bluffton sent eight hitters to the plate in the third. Josh, Jake and Justin Dyhkhoff all scored. Jake and Justin and Wyatt Hamann all batted in runs in the inning, which completed the scoring in the game.

Alex Twenge, on in relief of starter Andrew Weber, retired 10 Braves in a row before allowing a double to Hamann. Jacob Booden finished the eighth with a strikeout.

The Braves will face the winner between Sartell and Wanamingo on Friday, Sept.3, at 7:30 p.m. in Waconia.

The Watertown Red Devils advanced to the round of 16 with an 8-1 victory over Avon Sunday at Chaska Athletic Park.

Right-hander Zach Iten was the winning pitcher, allowing only a first-inning run. He limited the Lakers to five hits and a pair of walks over the first six innings. He struck out four. Pat Tschida finished with three scoreless innings to earn a save. He did not allow a hit, walking one and fanning one.

Both teams tallied single runs in the first inning. Red Devils' leadoff hitter Tschida openned with a single to center, took second on a balk, and scored on Smith's double into the left-center gap.

Avon leadoff man Ryan Janzen reached on an error, stole second and scored from second on a fly ball which Jake Aderly caught on a dive. His throw allowed Janzen to score the tying run.

Watertown added four runs on six hits in the fifth when it went to a small ball strategy with the bottom of the order. Andrew Nichols  led off with a knock to right field. Aderly and Jadrien Keavy both dropped down bunts and both reached base. Tschida and Smith followed with base hits to plate them.

The Red Devils tacked on three insurance runs in the top of the ninth on three hits.

Tschida went 2-for-3 with two walks. Iten had an RBI double to help his own cause. Andrew Nichols was 2-for-4 with a run scored. Keavy was 2-for-3 with a walk and two runs from the nine-hole in the batting order.