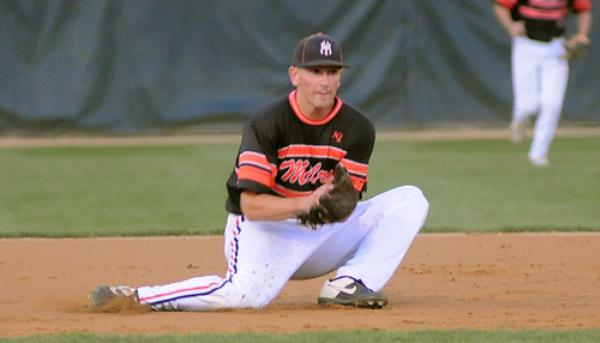 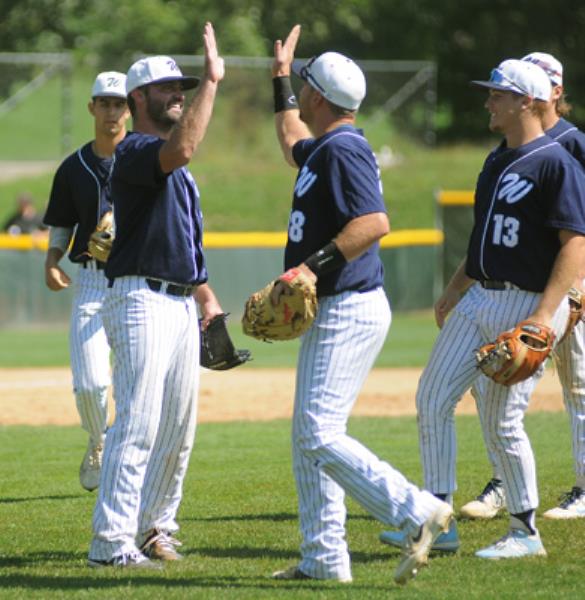 Schmidt’s walk-off RBI sent Jackson Hughes home for the winning run in the 10th inning of a 4-3 victory over New Ulm. Brewers pitcher Ethan Stade couldn’t nab the ball from Schimdt’s bat as it sailed over his glove. Hughes then beat Brewers catcher Josh Seidl’s tag attempt at home plate.

New Ulm had its chances early with a 3-1 lead through the top of the fifth inning. Milroy tied it up with two runs in the bottom of the inning, and the 3-3 tie held through the ninth inning.

That’s despite the fact the Yankees out-hit the Brewers 16-4. Neither Stade nor starting pitcher Mitch Bockenstedt could contain the Yankees batters. Bockenstedt gave up nine hits and surrendered three earned runs in four innings of work. He also threw three strikeouts. Stade went 5 1/3 innings and gave up seven hits and one earned run, and he fanned four batters.

Yankees third baseman Aaron Mathiowetz went 2-for-5 and with two RBIs to lead the team. Second baseman Derek Rasmussen hit 1-for-5 and drove in a run, and Schmidt, a designated hitter, batted 2-for-5 with an RBI and run scored. Shortstop David Schmidt led the way in hits, going 3-for-4 with a run scored.

Milroy pitcher Josh Kingery, a draft pick from the Atwater Chuckers, threw 14 strikeouts in 10 innings and allowed one earned run on four hits. He collected the win as the Yankees advanced to play on Sunday.

The Yankees will play Watertown at 1:30 p.m. in Chaska.

Goracke simply gained momentum and finally broke through Young America’s pitching and fielding as the Irish overcame a 4-0 deficit to win 6-5. He drove in the winning runs on a two-out, two-RBI single in the bottom of the eighth inning for the 6-5 lead. Seth Ambroz and Kyle Rhodus scored the tying and winning runs for the Irish.

Goracke, a former Northern State standout and nearby Jordan native, went 2-for-2 with three RBI. He got the first base hit of the day for the Irish with a single on a deep shot to right field in the third inning.

That’s about all the offense St. Patrick produced going into the bottom of the fifth inning. Young America took control meanwhile, building a 4-0 lead through the top of the fifth.

Josh Lenz put the Cardinals up first when he doubled to bring home Matt Mann in the top of the second inning. Hunter Rickaby set it up with a sacrifice bunt, which moved Mann to third base.

Isaac Hormann led off with a double in the third inning for the Cardinals, crashing into second base. He advanced to third on a wild pitch and scored on Alex Logelin’s RBI single for a 2-0 lead. Logelin moved to third on a fly-out, but the Irish escaped the inning before he could score.

Roch Wittaker hit it just over the glove of Irish shortstop Jack Friedges to bring home two more base runners for a 4-0 lead in the top of the fifth inning. Brice Panning, who drew a walk, and Logelin, who singled, benefitted from Wittaker’s hit to the gap.

Goracke then put the Irish on the board for the first time in the bottom of the fifth inning with a sacrifice fly to center field, scoring Zak Endres. Jace Westman got Ambroz across with a ground out to first base, trimming the deficit to 4-2.

A sixth-inning setback didn’t deter the Irish either after the Cardinals took a 5-2 lead on an error.

Goracke got Irish base runners moving in the bottom of the seventh with a sacrifice bunt.

Then, Irish players not named Goracke came up with runs in the seventh to trim the deficit to a run, 5-4. It started with Endres scoring off a ground out by Jace Westman followed by Jack Friedges doubling to score Ambroz.

St. Patrick pitcher Trevor Divinski came up with the win in relief of Collin Denk. Divinski fanned four batters in 3 2/3 innings. Dillon Whittaker, who started for Young America, threw five strikeouts before leaving the mound in the eighth.

The Irish will face the Watkins Clippers at 11 a.m. on Sunday in Chaska.

Eric Carlsen came up big in his final two at-bats to lead Alexandria to a 5-3 comeback win over Maple Lake.

The Black Sox right fielder scored the go-ahead run, breaking a 3-3 tie, in the bottom of the seventh inning off an RBI double by shortstop Chris Curry to the left field wall. Carlsen singled to lead off the bottom of the inning.

He struck again in the eighth inning on an RBI single with runners in scoring position, bringing Colin Erickson home for a 5-3 lead. Carlsen went 3-for-4 with two RBI and a run scored.

Maple Lake started off with a bang as Lakers left fielder Donnie Mavencamp hit a two-run home run over the left field wall in the first inning for a 2-0 lead. The Lakers’ lead lasted only two innings as Alexandria bounced back to score a run in the second inning and another two in the third.

Logan Orazem tied things up for Maple Lake 3-3 in the top of the sixth inning on a sacrifice fly, scoring Ben Goelz.

Maple Lake threatened in the bottom of the seventh inning when Ben Clapp stole second and advanced to third amid fielding errors by the Black Sox. Left fielder Brady Burgau kept the Lakers from breaking the tie when he made a diving grab for the third out.

Alexandria will play Waconia on Sunday at 3 p.m. in Waconia.

Matt Geislinger struck out 15 batters for Watkins in a no-hit shutout of St. Martin for a 3-0 win.

Geislinger, who threw a perfect game in the regular season, also did some damage at the plate for Watkins with a sacrifice fly in the top of the eighth inning, which scored Brenden Ashton. Kevin Kramer scored the first and only run needed in the third inning when he beat the tag at home plate.

Kramer finished with 2-5 batting and a run scored. Carter Block led the Clippers with 2-4 hitting and an RBI. Dan Berg went 1-5 and scored a run.

Martins pitcher Scott Lieser took the loss despite striking out nine batters, walking none, and allowing two earned runs on nine hits. Lieser pitched for eight innings before Ben Schroeder took over in the ninth and threw a strikeout.
The Martins were no-hit in their previous game but prevailed 1-0 against Fergus Falls.