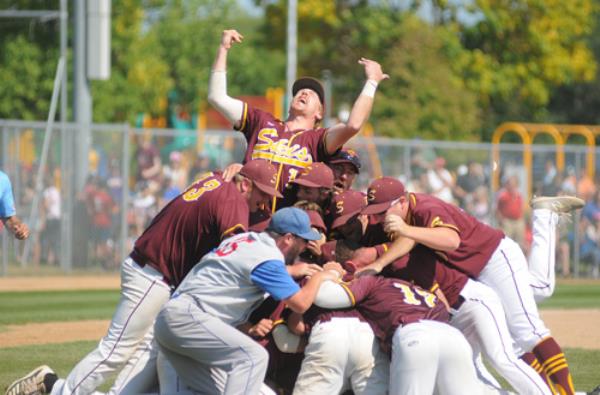 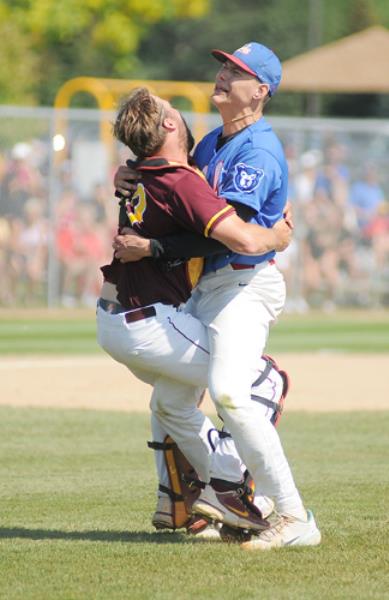 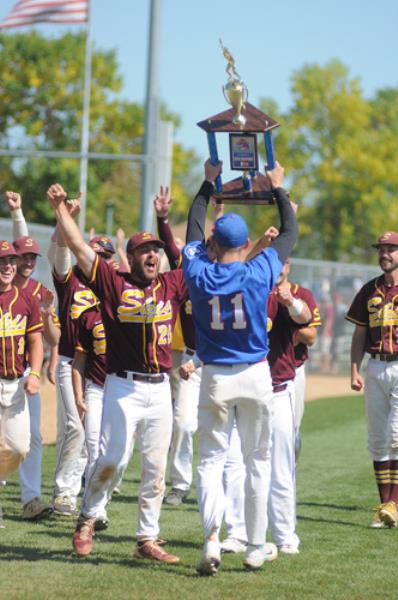 For 10 innings Caleb Strack and Adam Prehn locked in a pitchers’ duel, then Sobieski struck.

Prehn stymied the Skis until the 11th inning when they scored three runs and held on in the bottom half of the inning for a 3-0 victory to clinch the Class C state title before an announced crowd of 1,504 fans at Lions Field in Waconia.

The Skis hadn’t gotten a hit since the fifth inning against Prehn, Watertown’s starter, but finally started a rally. Prehn, a draftee from the Plato Blue Jays, hit Sobieski catcher Riley Hirsch with a pitch and followed that with a five-pitch walk to leadoff hitter Beau Hanowski. Prehn gave way to Red Devils’ left-handed reliever Pat Tschida to face left-handed hitter Scott Litchy. Litchy executed a sacrifice bunt to move both runners into scoring position for No. 3 hitter Collin Eckman, who delivered a single through the right side of the infield to score Hirsch. Hanowski later scored on a wild pitch and Ben Hanowksi delivered an RBI double to the left-center gap to score Eckman.

Watertown manager Jared Duske felt confident turning to his team’s leader in Tschida, though, he wondered if he should have done things differently, as is the case in title games.

“Hindsight, looking back on it, I maybe put that guy on to load the bases to get another lefty up to get a ground ball that would’ve been a double play ball,” Duske said. If I don’t do that the whole situation changes.”

For a state tournament that featured 13 one-run games, another close one seemed only fitting.

“It was just a tremendous battle between two great teams and it’s what a state championship should be and what it should feel like,” Sobieski manager Brad Czech said.

Until the 11th inning, Watertown seemed poised to break the deadlock. The Red Devils nearly did in the bottom of the ninth inning. Matt Butler led off the inning with an infield single and Jake Anderly followed with a one-out double to set the table. After Jadrien Keavy grounded out to short, Tschida had a chance to provide Watertown a walk-off win for its first state title since 1951. But Strack picked up his seventh strikeout of the game to end the inning.

“We had our guy up,” Duske said. “Pat Tschida -- I will take that spot every day of the week. That at-bat is going to be with him for a long time but that dude, he is a gamer.”

Strack finished with 10 strikeouts in 11 scoreless innings on 157 pitches. He allowed seven hits and walked three and danced out of the few jams he faced, like in the sixth inning.

The Red Devils put runners on first and second in the sixth inning after a Zach Iten one-out single and an error at third allowed Ryan Hangartner to reach. But Strack, a Randall Cubs draftee, reared back to strike out the next two batters to end the inning.

Watertown also had runners in scoring position in the first, third, sixth and ninth innings. The Red Devils stranded 11 runners in the game. Third baseman Ben Smith finished 2-for-4, a day after going 3-for-5 against Watkins in the semifinals. Catcher Nick Trucke went 2-for-5 in the loss.

Watertown reached the state tournament for the first time in 12 years last season and appeared in just its second state championship in club history.

Sobieski last appeared in the 2018 Class C championship where it fell 8-5 to Plato. The Skis moved up to Class B for the following two seasons before returning to Class C this season. It’s just the second state title for the Skis despite a string of state appearances from 2010-18. Sobieski also finished second in 2016 after winning a title in 2014.

Skis stalwart starting pitcher Tyler Jendro highlighted many of those runs, including 2014 when he won all six games for Sobieski, a state tournament record that likely will not get equaled. As much as he wanted to, Jendro didn’t throw a pitch in this tournament due to injury.

“I had an impingement in my shoulder all year and this last Monday I went in and took an X-ray and a piece of my shoulder is actually broken,” Jendro said.

Jendro warmed up in the bullpen during games after receiving a cortisone shot Monday but gave way to others on the pitching staff.

Instead, he passed on his knowledge to Strack, a junior-to-be at Winona State University, who helped lead Randall to its first state tournament appearance since 1994 last season.

“He was super jacked up,” Jendro said. “When that happens you don’t get on top of the curveball and he was opening up a little bit on his frontside and I tried to tell him to get his momentum to home plate instead of falling off to the dugout. It seemed to help a little. He was absolutely phenomenal.”

Strack finished the tournament with a 4-0 record and a .51 ERA to earn tournament Fred Roufs MVP honors. He struck out 43 hitters in 35 innings and allowed three runs, two earned, in that span. Strack threw a complete-game two-hitter Saturday against Dumont in a 5-0 win and felt better as game time approached.

“When I started warming up there was a little soreness,” Strack said. “It loosened up really, really nice. As I settled in, it felt great.”

Strack actually offered Czech to pitch on Sunday, if needed, but Czech opted to throw Fort Ripley draftee Ethan Branum, who delivered 8 ⅔ innings in a 9-6 win over Alexandria in the semifinals. Earlier in the day, Pierz Lakers draftee Chad Weiss threw a complete-game victory against Sartell in a 5-1 win. Weiss also relieved Strack in a 6-5 second-round victory over Isanti.

BEN BACK AT BAT

Sobieski third baseman Ben Hanowski is Minnesota’s all-time leading scorer in high school hockey history and had an eight-year professional hockey career, beginning with the Calgary Flames. He spent last season with Kölner Haie, a pro team out of Cologne, Germany. But he returned for his first full season of amateur baseball for the first time in 12 years this spring to rejoin his brothers Beau and Joey with the Skis.

“Early on there were some ugly weekends, just kind of getting a feel for it,” Hanowski said. “It was something competitive and I really enjoyed that once I was done playing hockey. Each weekend I kept getting a little better, started to feel more comfortable as the season went on.”

Hanowski returned to amateur baseball, in part, to compete and now he’s part of a state championship team. He went 6-for-23 with three runs and two RBI in the state tournament.

The 2021 MBA amateur baseball state tournament eclipsed the 20,000 fan mark for the first time since 1959. The entire tournament drew 21,013 fans through three weekends. The 1959 tournament in St. Cloud drew 21,454 in an era before major league baseball in Minnesota. Faribault, Dundas and Miesville will host the 2022 state tournament.