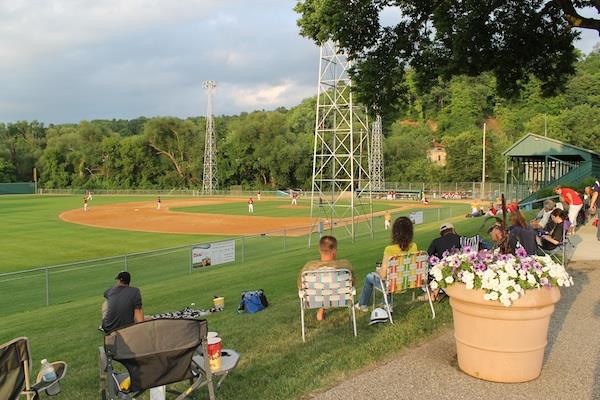 August is right around the corner and that means one thing in the world of amateur baseball – the state tournament. This year’s hosts are Jordan and Belle Plaine, who both have made significant renovations since hosting the tournament ten years ago.

In Jordan, they have the ‘Mini Met.” The field has a grandstand along the third base line and a really nice lawn area beside it along the left field line for those who wish to sit down on the grass hill and watch the game. You may recall that the Mini Met used $90,000 for renovation funding. There were improvements made on the field as well as renovations on the grandstand.

It is a rather shorter field with a ten-foot outfield fence with 320-foot distances to the poles, but the deepest part of the park stretches to around 370 feet in right center field. While speaking with Brett Goracke from Jordan, it’s clear the field is, and always has been, well maintained.

“Obviously we have to do our best in keeping the mound and plate ground well maintained and we have a good field for the tournament.”

Goracke also said extra accommodations are made for the state tournament.

“We have to get a couple sets of bleachers and put them along the first base line since we’ll be expecting a bigger crowd during the tournament,” he said. “We have a big parking lot next to the stadium, but there is a park near the ballpark that is really convenient should the parking lot become full. We will also have to get the guys to keep the field well maintained throughout the tournament.”

In Belle Plaine, they have made a lot changes to Tiger Park since hosting the tournament ten years ago. Over the course of the last year the ballpark was granted $42,000 in renovation funding (a good portion from the city). After speaking with Shane Hofmann, who is a chairperson for Belle Plaine, he said many changes were made to enhance the player and fan experience.

“One of the things we did was build a deck behind first base that now can seat an additional 75 to 100 people,” Hofmann said. “We also replaced the roof of the grandstand that sits on the left side of the field. There is a new scoreboard in the outfield as we replaced the old one. There used to be a chain-linked fence in front of the grandstand and we replaced it with very nice black netting.”

When asked about making extra accommodations for the fans coming in to watch the tournament, Hofmann said there are many options.

“We have a nice lawn area that the fans like to use to sit down on,” he said.”We also have tabletops between that area and the grandstand for those who like to stand around and watch the game. With the deck that we put in along first base, now we won’t have to take bleachers from some place. This year we managed to put in a parking lot in the outfield and we also have a lot of off-street parking for the fans coming to watch the games.”

Hofmann was definitely pumped for the tournament to start, and it’s clear that Jordan and Belle Plaine cannot wait for this tournament to get started in a couple weeks.